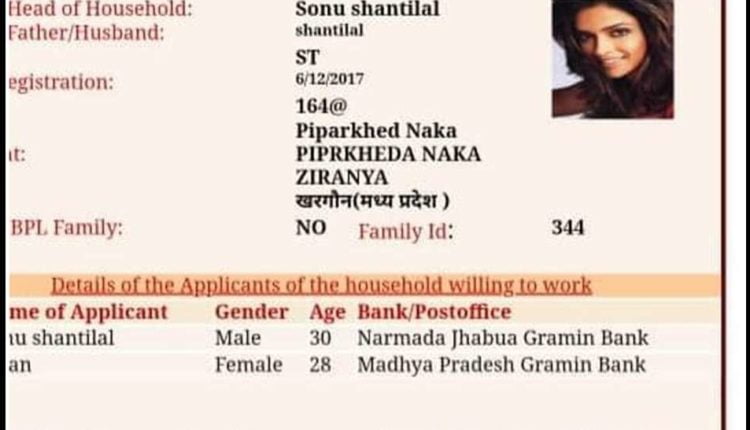 Mumbai: Lakhs of rupees have been claimed using fake MNREGA cards in a village in Madhya Pradesh’s Khargone district.

According to an NDTV report, fake MNREGA cards with photos of Deepika Padukone and other celebs were issued in the name of Sonu Shantilal, Manoj Dubey and other villagers. Miscreants used these fake job cards to claim wages from Peeparkheda Naka village in Jhirnia panchayat.

Reportedly, Sonu Shantilal was paid for building a drain near his village. But, Shantilal said that he has no idea about it.

“I don’t know how this card was made. They replaced my wife’s picture with Deepika,” said Shantilal. He accused the panchayat secretary and employment assistant for this fraud.

Besides, a sum of Rs 30,000 was withdrawn every month against Manoj Dubey’s card. But, Dubey claimed that he has 50 acres of farmland and he never made an MNREGA job card.

The CEO of the district panchayat, Gaurav Banal, has ordered an inquiry into the MNREGA job card scam.

“Information on 11 job cards with pictures of celebrities has come to my notice. In the last few days, large amounts of money have been withdrawn and muster rolls filled. We will find out how the job cards were issued and how these pictures were taken. Action will be taken against whoever is found guilty after the investigation,” Banal said.