Find Out The Most Admired Indians Worldwide & In Pakistan 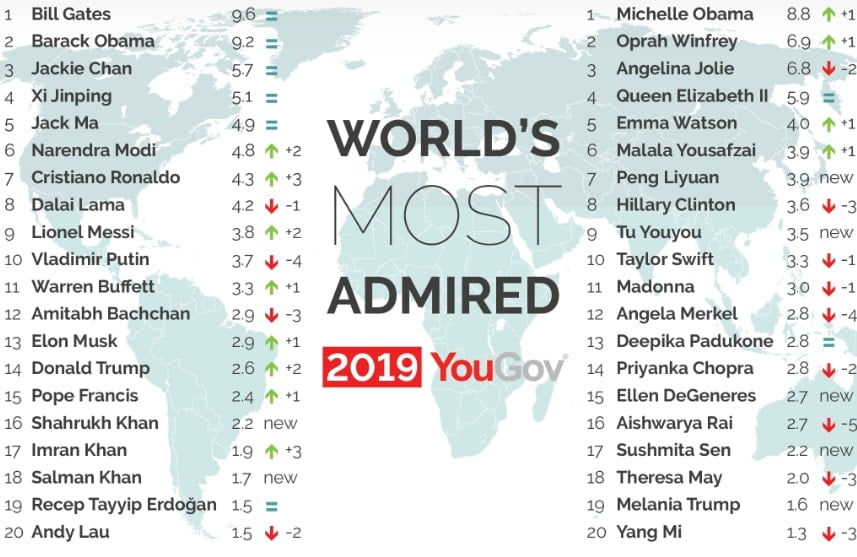 Modi was followed by the Dalai Lama in the 8th place, Amitabh Bachchan (12), Shahrukh Khan (16) and Salman Khan in the 18th place in the top-20 list of the most admired men worldwide.

Actress Deepika Padukone was ranked 13th in the top-20 list of most admired women worldwide, followed by Priyanka Chopra (14th). Aishwarya Rai and Sushmita Sen also made it to the list, placed at 16th and 17th positions, respectively.

YouGov also interviewed participants country-wise as to whom they regard as their most admired men and women worldwide.

Bollywood celebrities such as Amitabh Bachchan, Shahrukh Khan, Salman Khan, Deepika Padukone and Priyanka Chopra enjoyed a worldwide popularity as the survey showed these stars figured in the list of the most admired persons in several countries.

The Indian voters gave the maximum score to Narendra Modi at 15.66 per cent. He was followed by cricketing legend M S Dhoni at the 2nd place and industrialist Ratan Tata at the 3rd place.

Deepika Padukone was voted as the sixth most admired woman by Pakistanis in the list topped by Bilquis Edhi, an active philanthropist in Pakistan and billed by some as the mother of the nation.

For the US citizens, Salman Khan and Amitabh Bachchan had more admirers than Narendra Modi. In fact, the Pakistani premier was more popular in the country than the Indian PM.

The most admired men list was topped by former US president Barack Obama, followed by the current President Donald Trump and veteran Hollywood actor Clint Eastwood at the 3rd place. Dalai Lama was the 8th most admired men.

Priyanka Chopra’s entry into Hollywood seems to have made her a recognisable figure in the country as she got more scores then Aishwarya Rai, Deepika Padukone and Sushmita Sen.

Farmer Commits Suicides Due To Crop Loss In Balangir