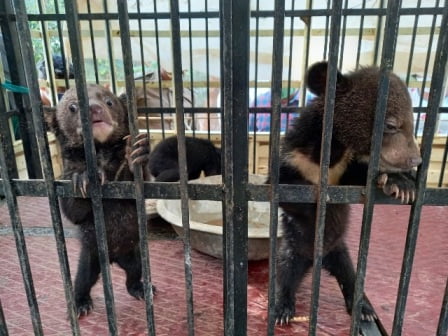 Bhubaneswar: The Forest Department staff on Thursday rescued five bear cubs from a cashew orchard near the toll gate at Gangapada, on the outskirts of the Odisha capital.

Sources said that the incident came to light after some locals found two bear cubs in a cage and three others moving outside it this morning.

On being informed, the forest staff rushed to the spot and rescued the cubs. As the cubs were hungry, they were given the milk.

Talking to the media, a forest staff said that these large species of bear are not found in Chandaka Sanctuary. They were most likely caught from the Nayagarh district by some poachers, who were planning to smuggle them to the neighbouring states.

The rescued bear cubs were then shifted to Nandankanan Zoological Park, where they will be kept inside the enclosure.