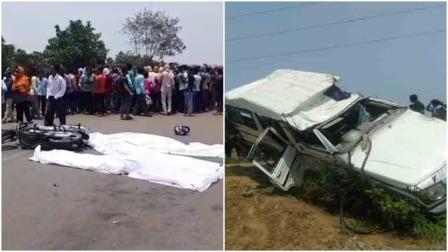 In the first incident, three members of a family died on the spot when a coal-laden truck hit the bike they were travelling in near Pipilimala on NH-49 in Jharsuguda district. The dead have been identified as Bisikeshan Kalo, his wife Tapaswini and son Satyaranayan.

Reports said the couple and their son were on their way to their village, Kudaloi, after purchasing items from Belpahar for his marriage when a coal-laden truck collided head-on with the bike, killing them all on the spot.

After the accident, the driver fled from the area. Tension ran high as residents staged a road blockade demanding compensation to the next of kin of the dead.

Following information, Belpahar police rushed to the spot. The residents withdrew the blockage after the police assured compensation to the kin of the dead. The bodies were later taken for post-mortem.

In another incident, two persons died and six others were seriously injured after a Bolero jeep in which they were travelling hit a roadside electric pole on Baisinga-Manatri road in Mayurbhanj district.

The deceased have been identified as Bijay Jena (driver) and Rama Chandra Das of Mahulapatna village. The injured passengers are undergoing treatment at the district headquarters hospital in Balasore.

The incident took place when some residents of Mahulapatna were on the way to Managobindapur village to fix a wedding date.