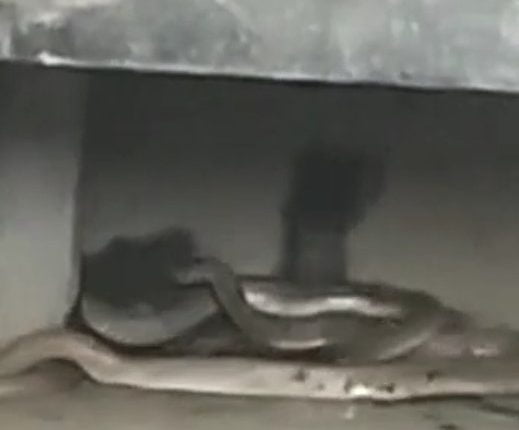 Bhubaneswar: Hit hard by flood situation for the last few days, people in most of the affected areas of Odisha now appear to be facing a new threat from poisonous snakes and reptiles.

While huge crocodiles were spotted in some places of Jagatsinghpur and Jajpur districts triggering panic among people, poisonous snakes and scorpions were reportedly sighted inside houses that remained submerged in floodwater, reports said on Saturday.

Threat from snakes, other reptiles and scorpions happens to be a common menace during flood and people should remain vigilant and observe utmost care as a precautionary step, senior officials said.

As 12 of the 30 districts of the state witnessed flood situation, around five snakebite incidents have so far been reported from some parts of the deluged areas. The affected persons have been provided with proper medical treatment, Special Relief Commissioner (SRC) PK Jena has reportedly stated.

While half the state witnessed flood situation due to rise in the water level of Mahanadi and other rivers in the aftermath of back-to-back low pressure areas in the region, a deep depression over the Bay of Bengal unleashed more downpour in several parts of Odisha since Friday.

As a result, people in many areas fear incidents like snakebite and scorpion attack. A huge python was recently caught in a fishing net at a village under Erasama block of Jagatsinghpur district, while another snake incident was reported from Banki area, reports said.

This apart, snakes were spotted in floodwaters in some villages in Marshaghai block of Kendrapada district where a large number of people had been evacuated from low-lying vulnerable areas and shifted to shelter centres.

On their return, many people found snakes and scorpions inside their houses. Officials have advised them to be alert while entering their houses to avid attack by snakes or scorpions.

Besides snakebite scare, reports of people suffering from minor ailments like cough and fever have been reported from many flood-affected areas. Over 5,500 people have been provided medical treatment in different places, officials said adding that people have been advised to come to the hospital immediately after a snakebite instead of approaching quacks or resorting to self-medication. They should approach ODRAF, NDRF or Fire Service personnel for help.