Private weather forecasting agency Skymet reported that air pollution in Bhubaneswar on Tuesday had soared to ‘hazardous’ category with the AQI touching 306 for Particulate Matter 2.5 (PM 2.5) near Jaydev Vihar.

However, this was refuted by the Odisha State Pollution Control Board’s (OSPCB) member secretary Debidutt Biswal. “The AQI level in Bhubaneswar is averaging between 90-110, which is in the ‘satisfactory’ to ‘moderate’ level,” he said. He also explained that satellite data that private agencies are reportedly using are not accurate and the OSPCB is doing proper local testing in their labs here. 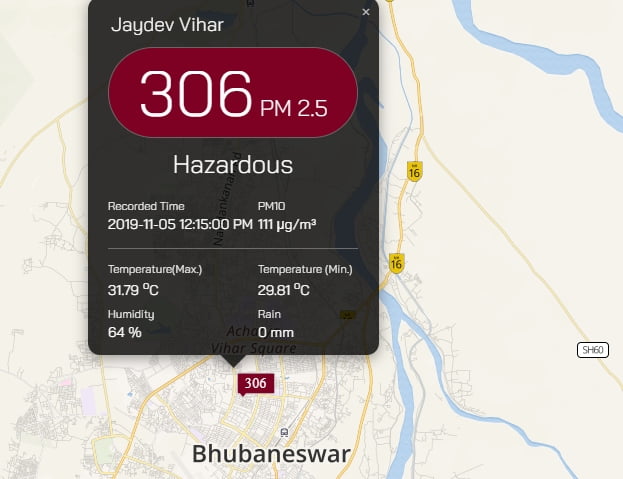 The pollution tests are being done twice a week, said Biswal.

The OSPCB has set up display monitors at select places in the city, which shows pollution data from various places of the city as follows:

The pollution level in Delhi had crossed 999 on Sunday forcing the government to declare a public health emergency.

Bhubaneswar is safe for now and air purifiers and masks are not required for healthy people, remarked Biswal.

Pollution levels usually increase during winter as the wind speed is low and it can’t uplift the smog. IMD Director HR Biswas said that there is mist in the air as small droplets of water are remaining suspended in the air. This signals the onset of winter.

Here’s How The Oppn Reacted To Odisha Budget