Fourth King Cobra Rescued In 2 Years In This Odisha Village 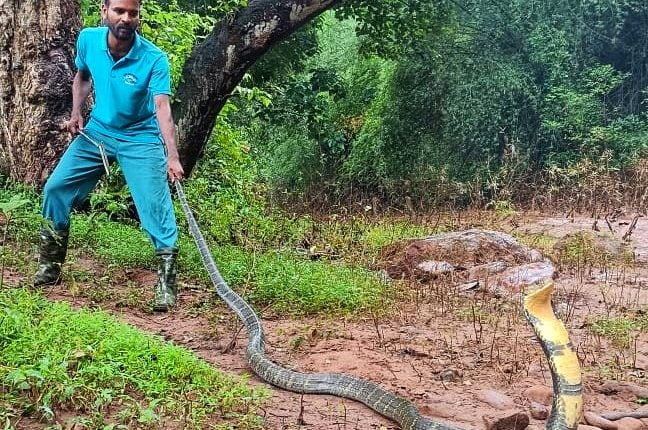 Angul: A King Cobra was rescued on Wednesday from a village in the district for fourth time in the last two years.

According to sources, the villagers of Gadataras village spotted the snake near a pond close to a Shiv temple in the morning. Alarmed by the huge snake, they informed the Snake Helpline.

Member of Snake Helpline Aditya Behera along with volunteers Shivani Shankar Sahu and Biju Bhoi went to the village to rescue the snake. They succeeded in capturing the 12-ft King Cobra without causing any harm to it.

After keeping the adult snake safely in a bag, the Snake Helpline members took it to the Forest department office at Bantala. After medical check-up of the snake, the Forest officials on the direction of Forest Ranger released the snake in a safe habitation in the nearby forest.

It may be noted that as many as three King Cobras have been rescued from Gadataras village in the last two years.

Banks To Remain Closed For 21 Days During ‘Major Holiday’ October