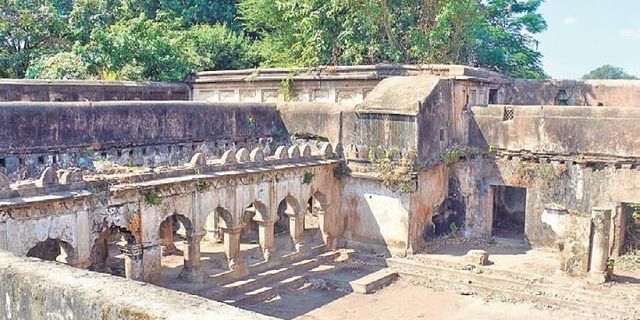 Sambalpur: With an aim to preserve heritage buildings and cemeteries in the district Gangadhar Meher University has taken a step forward in this direction.

The School of History has decided to adopt Bakhri (King’s Palace) for promotion and preservation of the monument under its Heritage Awareness Programme.

In the first such visit, 40 students of School of History visited the heritage site on Sunday. “The aim of this programme is to make students aware about local history and heritage besides encouraging them to safeguard them,” said  Prof Atul Pradhan.

Pradhan said students will clean the palace and promote the heritage building among people.

Member of INTACH, Sambalpur Chapter, Deepak Panda said in the past INTACH had proposed the state government for renovation of Raja Bakhri. A detailed project report of Rs 2.5 crore was also submitted but there was progress, Panda was quoted telling The New Indian Express.

Raja Bakhri was built by King Chhatra Sai in the early 17th Century. The two-storey building has around 40 rooms. The palace was home to Surendra Sai during 1857 uprising and the palace also played a role during the Quit India Movement when local freedom fighters waved the National Flag from atop the building.

Fourth King Cobra Rescued In 2 Years In This Odisha Village