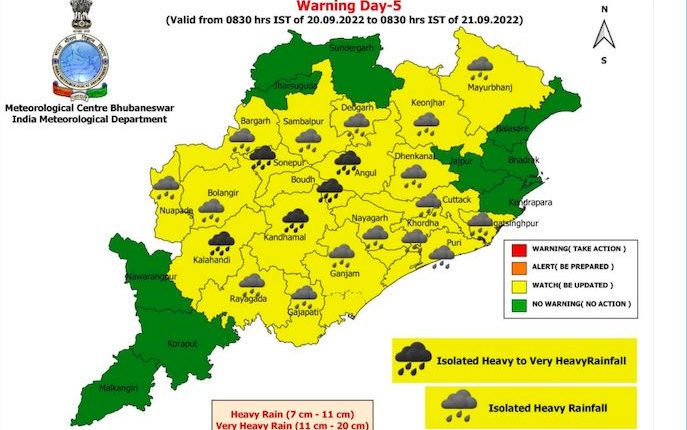 Bhubaneswar: Heavy rainfall is likely to lash Odisha from September 18 under the influence of a possible low pressure over northwest and adjoining westcentral Bay of Bengal around September 20, the India Meteorological Department (IMD) informed on Friday.

A cyclonic circulation is expected to form over the Bay of Bengal on September 18 and intensify into a low-pressure area in the subsequent 48 hours, the MeT office said in its midday bulletin.

While Odisha will continue to experience thundershower for two days, the intensity of rainfall is likely to increase from September 18 with heavy rainfall ( 7 to 11cm) forecast for one or two places in Kalahandi, Kandhamal, Balangir, Gajapati, Ganjam, Puri and Jagatsinghpur.

Heavy to very heavy rainfall ( 7 to 20cm) is likely at one or two places in Boudh, Angul, Sonepur, Kandhamal, and Kalahandi on September 20. Heavy rainfall ( 7 to 11cm) alert has also been sounded for one or two places in Gajapati, Ganjam, Puri, Khurda, Nayagarh, Cuttack, Jagatsinghpur, Dhenkanal, Keonjhar, Mayurbhanj, Deogarh, Sambalpur, Bargarh, Balangir, Nuapada and Rayagada during this period.