From Dismal To Delight In 3 Months, How Things Turnaround? 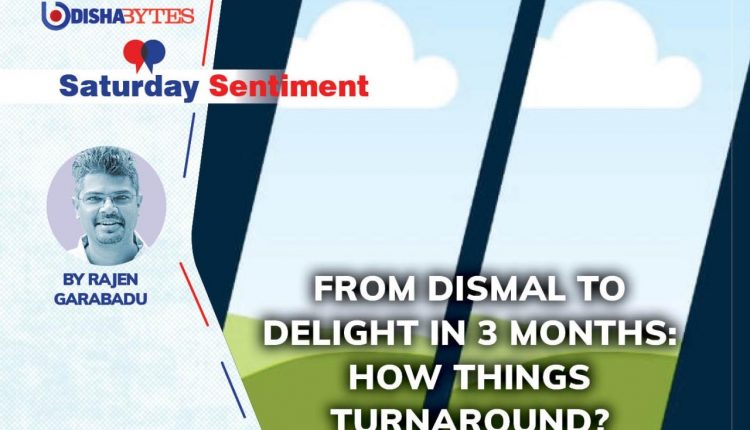 Do you feel your time’s up in your current workplace? Does it appear you’ve hit a dead-end and there’s nothing you can do to salvage the crisis? And the best recourse is to look out for an opportunity elsewhere.

I felt the same many years ago. My story may help you if you are there now. Or if you get there in the future.

I was summoned by the Big Boss of the company and told my seniors had reservations about my demeanour. He mentioned a couple of instances but gave me no opportunity to defend myself. He was polite and suggested I look into some of the concerns expressed. He recognised and commended my key contributions, in his usual gracious style.

When I walked out of the office that night, I gathered things were not going well for me. After all, you don’t get facetime with the founder for a small issue. Not being able to reply to the charges was a major downer. I began to feel my days were numbered there.

That night when I got home, I phoned a senior journalist who has remained a well-wisher. I let him know I was open to any new opportunity where I could fit in. He was curious why I’d even entertain such a thought. I narrated the conversation that took place earlier that evening.

The veteran at the other end told me I was overthinking the problem. He said he wouldn’t worry if he were in my place. He suggested I sleep over it and if I still felt as strongly the next day, he’d be happy to recommend me to a couple of journalist owners who ran successful media companies. But he didn’t think it would come to that.

The morning after, I began to view things more clearly. In my mind, I replayed the conversation that took place in the founder’s office. Maybe it was not all that bad. He only asked me to introspect. Nothing else.

Before I left his office, he told me he received feedback some years ago about a former employee but had not acted on it. The ex-employee was an incredibly talented professional. Some months later, that episode hadn’t ended well. He did not want the same outcome. Therefore, he felt the need to talk to me.

What bothered me most was not being given an opportunity to defend myself. He only heard one side. Not being able to clarify my position in the presence of the founder disturbed me deeply.

But I decided to wait and watch. And heed the advice of a more seasoned professional whom I had dialled the night of the incident.

Soon after, I was given a challenging assignment by the head of my department. Success in this project was critical to improving our overall market position. Others before me had tried but the needle hadn’t moved. The chances of achieving the intended goal seemed a rather tall order.

“This is your opportunity to prove your mettle,” said my boss. “So far your successful contribution has reflected in a brand that was already well known before you assumed charge. You may have taken it to new heights but you haven’t set it up from scratch. Let’s see if you can turn this one around”

The task was severely uphill. I was not sure if I was ready for the climb. A senior colleague urged me to take up the assignment at least for a month or two. I decided to bite the bullet.

The very next day, I sent a list of suggestions that I felt would enhance the overall product experience. Some suggestions required active input from other teams. Though I secured approval from the top to go ahead, there were bottlenecks that made implementation harder.

Not every suggestion could be acted upon because of the hurdles. But those directly in my scope were rolled out in the course of the next month, some of which bore fruit in about 10 weeks.

I was lucky. It’s not that others before me did not try. But market share rose significantly during my attachment. This was the second successive success in my portfolio.

Within three months of my meeting with the founder, I was promoted to a leadership position.

The reason for telling this personal story is to share my learnings. With all those who may be in the same boat now. Or get there in the future.

It’s natural to fear the worst during a setback. It’s okay to be prepared for any eventuality. But don’t lose sleep over it.

As long as you bring significant value to your role consistently, and it shows, you’ve nothing to worry about.

Bear in mind if you know your job and brace up for a challenge with all your heart and passion, you are likely to succeed.

Let your work speak for itself and drown the surrounding sound.

From a situation where I felt I had no future in my place of work to being promoted to a leadership position – in just three months – was a turnaround I could not have dreamt of. But it happened.

My appeal to those who find themselves in the same spot is to seek advice from an experienced well-wisher. It’s not easy to think rationally in a moment of personal or professional crisis.

I was fortunate to have benefitted from the counsel of someone who provided much-needed perspective when I struggled.

Sometimes it helps to stay put, ride the wave and do what you do best. With some luck, your situation can turn around too.