From KK To Another, The Magic Will Live On Forever 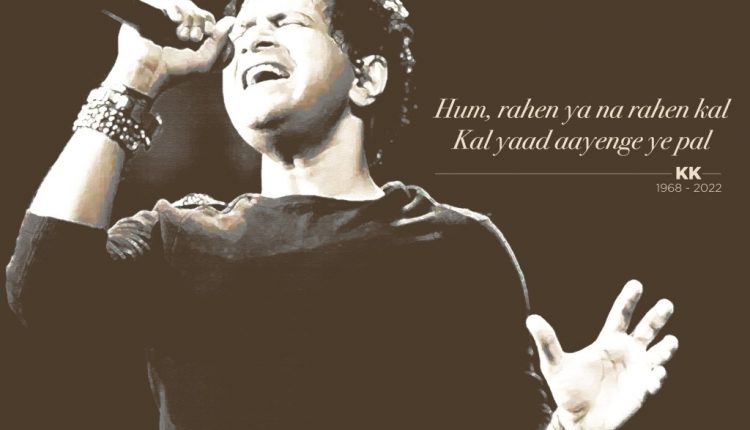 God seeks their company as much as we do.

One such soul left us on May 31, 2022. He was born Krishnakumar Kunnath and immortalised as KK.

A rare talent who scintillated the audience with his songs and chose to stay away from the limelight off stage. He did what he knew best – lived & loved music.

What can I say that’s not already been said?

I will stick my neck out: I rate him as the most successful male singer in the last 25 years in the world of Bollywood playback singers.

And I mean no disrespect to others who have done a great job over these years. I am a fan of many others. But no one has consistently lent his voice to chartbusters during this period as KK has done. No lean patch. His songs are evergreen.

When did the KK magic begin? Let’s rewind to the 90s.

Singer & Composer Leslie Lewis gave him his first jingle to sing. He went on to sing some of the most memorable jingles for brands like Nerolac Paints, Colgate & Hero Honda.

KK had to wait for his moment under the sun.

He transitioned into a playback singer, starting with AR Rahman’s ‘Kalluri Saaley’ and ‘Hello Dr.’ from Kadir’s Kadhal Desam.

Cut to 1999. The year that brought him stardom. Two gems: Pyar ke Pal & Yaaron from his debut album Pal. I remember exclaiming “Wow! is this dude for REAL?”

Both these songs have become generic to farewell and friendship. Like a timeless anthem.

In the same year, his first solo in Bollywood Tadap Tadap (Hum Dil De Chuke Hain Sanam) was released. By then he had made it impossible to ignore him. Singers take years to get there but here he had arrived in style and substance in his first solo attempt in the Hindi film industry.

But he didn’t rest on his laurels. He had much to do. To enthral his listeners in the short duration he graced this world.

He demonstrated his range once again when he sang Koi Kahe Kehta Rahe (Dil Chahta Hain) along with Shankar Mahadevan & Shaan. This was a fast-paced foot-tapping number that had an entire generation dancing to its tune. It still remains on every dance party playlist. I have two left feet and struggle with the very thought of dancing on stage. This is one of the rare songs that gravitates me to the dance floor. And I jump. Because dance I can’t.

Khuda Jaane, Tu Jo Mila, Labon Ko, O Humdum Suniyo Re, Kya Mujhe Pyar Hai, Tu Hi Meri Shab Hai, Zara Sa….the list is endless. I can go on and on. One cracker of a song after another over the years. KK was on a mission to spread love through his vocals.

He had an unmatched tonal quality in his voice which made every song endearing. When you hear a KK song, it feels as if rains have cooled the earth, cleansed the air and left a vivid green cast on the vegetation. His songs touch your heart and soothe your soul. KK was a mood-changer.

With accomplished singers, everyone has a favourite song or two. With KK, he made it impossible to pick just one or two. When you try to make up your mind on one of his songs, he’d surprise you with another. He’d not let you make a clear choice.

Every two or three decades, there comes a talent who mesmerises the world of Bollywood music. In the last half a century, I place two male singers in this exclusive club: Kishore Kumar and Krishnakumar Kunnath. By placing KK right up there with the legend, I know I am sticking my neck out again. But I have no doubt. If anyone deserves to be placed on the same pedestal, there is no better fit.

Both have much in common (besides leaving an indelible impact on me):

There are some differences. Kishore Kumar was flamboyant. KK was understated.

Kishore Kumar was celebrated in life and death. KK’s true impact and contribution among the masses seems to have come out much more after the news of his untimely demise. Not that he was not admired by fans during his time. But he did not get his due. Not completely.

What’s irrefutable is that other Bollywood male singers will find it impossible to match the eternal impact of the songs by both KKs. All great singers do have a few songs which are timeless. Both KKs have a library.

The loss felt in this world will be a gain in the other world. Both Kishore Kumar & KK must have met, hugged, and by now ready to collaborate on their first duet.

Alvida maestro KK! Had it not been for you, “the loop” feature in music players would not have been used as much.

(The author is Chief Executive Producer, News18 Network. This piece was first published on LinkedIn and has been reproduced here with his consent)