New Delhi: Eminent personalities from all walks of life paid tribute to Queen Elizabeth, the longest-serving monarch in British history. She died at the age of 96 on Thursday. The official announcement was made by Buckingham Palace on Thursday after members of the royal family, the Queen’s sons and grandsons arrived in Balmoral Castle where she spent her last days.

Among Indians, actor Shilpa Shetty, who spent a few years in London, shared a throwback picture from her meeting with Queen Elizabeth from the year 2007.

Shilpa Shetty who won the fifth season of the British TV reality show Celebrity Big Brother in 2007, later that year met Queen Elizabeth. She shared a picture on social media last night. She captioned it: “What an incredibly inspiring journey your life has been! It was an honour to have been in such august company. Rest in peace Queen Elizabeth II.” 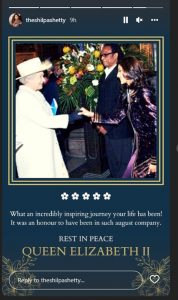 CUET-UG Results To Be Announced By Sept 15

BMC Imposes Fine On Vendors In Odisha Capital; Know Why