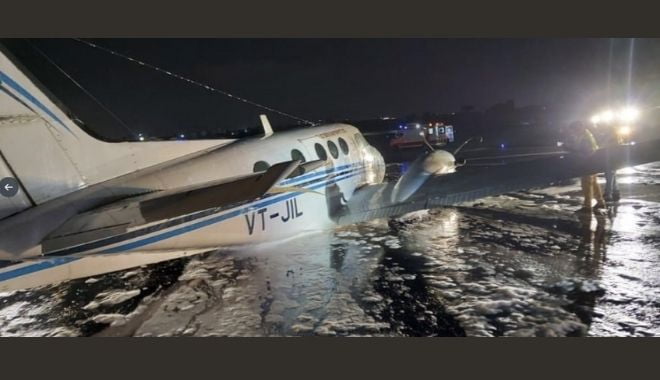 Mumbai: A full emergency was declared for a non-scheduled Nagpur to Hyderabad flight, ANI reported on Thursday evening. The flight, an air ambulance, was diverted to Mumbai after its landing gear fell off.

The flight made a successful belly landing in Mumbai.

The flight, Jetserv Aviation C-90 aircraft VT-JIL, lost a wheel while taking off from Nagpur.  It had a patient and doctor on board apart from crew. Everyone is safe and unharmed.

This video captures the crucial moments after belly landing of the ambulance flight on foam carpet in Mumbai after it lost a wheel during takeoff from Nagpur.

All onboard are safe.
Kudos to the crew & ground professionals.

Foam was spread on the runaway to prevent fire post belly landing. The pilot was instructed how to do a belly landing, DG, Civil Aviation, Arun Kumar told Indian Express.

Full emergency protocols mean that fire fighters are ready, security is alert, runway is fully cleared and so is air traffic.