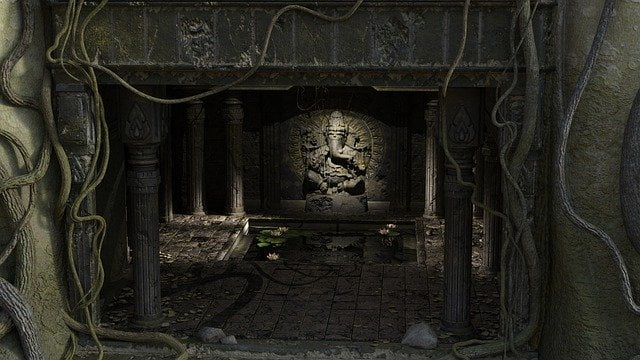 O Lord Ganesha with the curved trunk, the large body and with the radiance of a million Suns, please remove obstacles from all of my works and always.

Lord Ganesh is worshiped as the god of obstacle-free beginnings, of knowledge, wisdom and intellect. Any beginning, be it for Loukika karma (material work) or for Dharmik karma (Spiritual work), starts with the invocation of Lord Ganesh, as He blesses the work or the deed and makes it free of impediments. Hence, He is also addressed as Vighneshawar, Sidhidata, Bighnaharta and Sarbamangalakarta.

Srikshetra, or the abode of Lord Jagannath, is the Martya Baikuntha (heaven on earth) and Lord Ganesh adorns different parts of the temple to usher in hurdle-free and free-flowing experience in receiving the divine blessings of the Lord of the Universe, Lord Jagannath. Lord Ganesh blesses energy transmission, unabated, between the Lord of the Cosmos and the Cosmos (all of us & the existence including every-thing and no-thing).

As one climbs the baisi pahacha (22 stairs) at the entrance to the temple from the Lions Gate, one bows to the presence of the petite Ganesh idol on the left side, next to the temple of Lord Kasi Viswanath. Many are of the opinion that the father and son duo (Lord Kashi Viswanath or Lord Shiva & Lord Ganesh) help in destroying the negativities of the devotees and lead them to the darshan (audience or meeting) of Lord Jagannath, without any disruption. The ushering in fulfils the pilgrimage of Bada Deula.

After entering the temple, one finds Kanchi Ganesh, so named because it is widely acknowledged that the idol was brought to Puri and installed by Gajapati Purushottam Dev after his annexation of Kanchi state, gracing the western side of the temple. He is known by various names like Kanchi Ganesha, Uchista Ganesh, Bhanda Ganesha, Kamada Ganesh, Tantrik Ganesha.

The Ganesh deity in this temple is unique and rare because He is in the form of the ‘Uchhista Ganapati’ or the energetic and Tantric manifestation of Lord Ganesh. This is an unconventional portrayal of Lord Ganesh. Along with Lord Ganesh, His carrier, the mouse is present at the entrance of the temple. The Bij Mantra or the basic invocation of Lord Ganesh is (there are many invocations but this one is considered as the basic appeal): “Om Gam Ganpataye Namah”.

Another idol is located at the south of Jagannath Temple, at the base of Kalpabata, and hence is referred to as Bata Ganesh, the four-armed Ganesh. The Kalpa bata, the wish-fulfilling tree, is situated at the centre (Navisthala or the navel) of Sankhakhetra, Puri. It is said that Jagannath Das, the author of Odia Bhagabata, regarded it as the most sacred place inside the temple premises.

Scriptures indicate that Sri Chaitanya and Jagannath Das had met near Bata Ganesh, next to the tree and Sri Chaitanya was so impacted by the ‘Bhagabata’ that he embraced Jagannath Das and addressed him by the moniker ‘Atibadi’. The Buddhists who consider Lord Jagannath as an incarnation of Buddha often compare ‘Kalpabata’ with Mahaboddhidruma.

Bata Ganesh was one of the first idols to have been worshipped after construction of Jagannath Temple to ward off negativity. The four-armed idol has two right hands holding a Rudraksh garland and a broken tooth of an elephant. The two left hands hold a weapon (Parshu) and Ladu (Sweetmeats).

This south-facing idol is 4 ft high with a mouse in front of the idol. So natural is the feeling of the touch of the mouse by the devotees that it is widely regarded as ‘very alive’ to fulfil their aspirations.

A black granite Ganesh idol, called Nata Ganesh (dancing Ganesh), facing south, is found near Jalakrida Mandapa (water sports platform) close to the South Wall. This beautiful idol with eight hands is in ecstasy and is seen dancing, holding a snake above His head. With the other hands he is holding laddu, the sweetmeat, rudraksha mala (garland), elephant tooth, nut and blesses with one hand.  Many find this idol signifying the cosmic dance of the Lord to cleanse the mortal world of bad omen. This is often described as the dance of purity and deliverance.