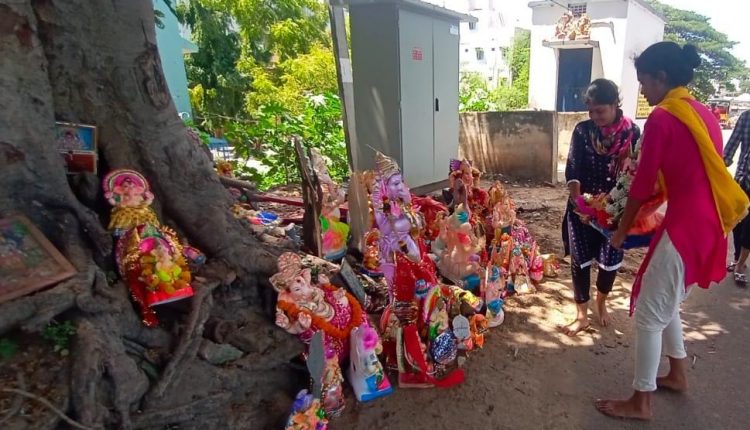 Berhampur: The failure on part of Berhampur Municipal Corporation (BeMC) to set up temporary ponds for immersion of Ganesh idols has sparked off resentment among the people as well as organisers of community puja.

The people of Berhampur city celebrated Ganesh Puja with enthusiasm and excitement this year as the state government allowed the celebration with public participation after two years. The community puja was banned for the last two years due to COVID pandemic.

However, after the puja was over, the people carried Ganesh idols worshipped in individual houses, schools, offices, community pandals and other institutions for immersion. But they failed to immerse the idols as the BeMC had not made any arrangement of temporary ponds.

Earlier, the BeMC used to create the temporary ponds for immersion of idols near ponds at Gosainnuagaon, Golapalli, Ambapua, Ankuli and Fastgate. The municipal body took the step on the order of National Green Tribunal (NGT) against immersion in the water sources used for human consumption.

The NGT issued the direction following complaint that the ponds, rivers and other water sources were getting polluted due to immersion of the idols which were made with toxic materials like plastic and artificial colours.

The BeMC has assigned the task of maintenance and upkeep of the ponds under its jurisdiction to 12 women SHGs. When the people went for immersion of idols in ponds at Gosainnuagaon, Gate Bazaar, Ankuli, Kamapalli, Bijipur and Golapalli, the SHG members prevented them from doing so. As a result, the people kept the idols on the banks of the ponds.

When contacted, enforcement officer of BeMC Tarun Kant said they have started preparing the artificial ponds. On completion of the ponds, hundreds of idols dumped on the banks of the ponds would be immersed, he added.