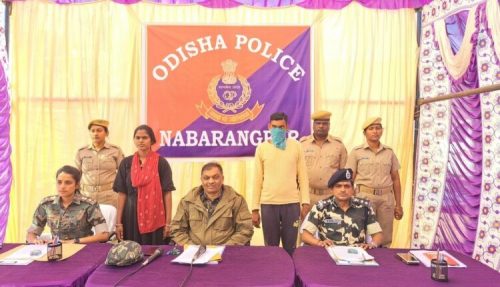 Nabarangpur: A hardcore woman Maoist cadre was arrested during a combing operation by security forces in a forest of Odisha’s Nabarangpur district on Tuesday.

Speaking to media persons here, Deputy Inspector General of Police (South-Western Range) Rajesh Pandit said while the personnel of SOG and DVF personnel and CRPF were carrying out the operation in Hatigaon Reserve Forest under Raighar police limits of the district, they came across the 25-year-old woman Maoist Poke Mandavi alias Anita. Another Maoist cadre Samudra Bagh, who was accompanying her, was also arrested.

Pandit said both Maoists belong to Mainpur Nuapada division of the banned outfit. While Mandavi belongs to Motodi village in Sukma district of Chhattisgarh, Bagh is from Nangalbod in Sinapali block of Nuapada district in Odisha.

He further said the Maoists were involved in several cases of violence in Nabarangpur, Nuapada and Kalahandi districts of Odisha and Chhattisgarh. Both of them would be forwarded to court.

What Will Shah Rukh Khan Do After Pathaan’s Release Tomorrow? Know His Plans