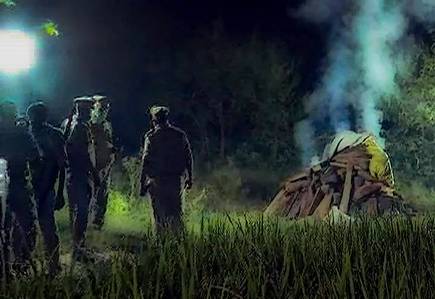 Mumbai: The National Human Rights Commission (NHRC) issued notices to the chief secretary and Director-General of Police (DGP) of Uttar Pradesh on Wednesday over the Hathras gang-rape case, in which four upper-caste men allegedly gang-raped a Dalit woman.

The DGP and chief secretary have been asked to submit a detailed report of the gruesome incident in the next four weeks. This comes in the wake of a complaint from a Maharashtra advocate seeking an SIT or CB-CID probe into the grave to NHRC.

Advocate Aditya Mishra is also seeking compensation for the victim’s family, according to Scheduled Caste Act that mandates compensation.

“A trial will be initiated at the earliest and if any delinquent police officer’s role is found, then criminal and disciplinary action be initiated against the police official on an urgent basis with interim suspension orders in the highest interest of justice,” read Mishra’s complaint.

Left Wing Activities Brought Down In South-Western Range Of…