He Is 91 And Campaigns On Cycle: Know The Candidate For Balasore Bypoll 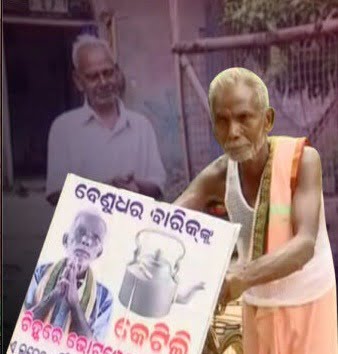 Balasore: The byelection to Balasore Assembly constituency has one thing common with 2014 general elections – a candidate with humble background campaigning on bicycle.

Among a few surprises that were thrown up by 2014 general elections was BJP candidate Pratap Sarangi for Balasore Lok Sabha constituency. Coming from an humble background, Sarangi believed in his support among the common people for his services. Amid big ticket campaigns by his rivals from ruling BJD MP and Congress, he cycled his way to emerge victorious and went on to become a Union Minister.

This byelection also witnesses another man who has dedicated his life to the service of people. He is 91-year-old Benudhar Barik.

Despite his age and no financial support, he has set out to take on BJD, BJP and Congress in the big ticket contest. Wearing the poor man’s dress of a dhoti and a banyan, Barik is moving from place to place on a bicycle for campaigning.

Well known among the slum-dwellers and people in need of the area, Barik believes that their their love and respect for him is his biggest support.

Unlike other leaders, he does not promise anything, but expects support from the voters so that he can serve them better as a legislator. He can only assure that he would continue to do the service to the people if he is elected, he tells them at their doorsteps during his campaign on foot.

The oldest man in the byelection, Barik is a veteran freedom fighter. He had participated in the Quit India Movement when he was only 13 years old.