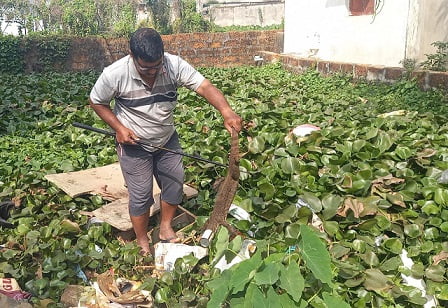 Bhubaneswar: A monitor lizard, whose head was stuck in an empty condensed milk can, was freed by Snake Helpline volunteers here on Thursday.

Residents of Laxmibihar area near Badagada Canal Road spotted the monitor lizard with its head trapped in the can.

The monitor lizard had by then moved into a marshy plot filled with water hyacinth and aquatic weeds. It was rescued and the can removed and then released.

Mallik, also honorary wildlife warden of Khurda district, said, “Mostly snakes and monitor lizards get trapped in these cans. People should crush cans properly and not litter the environment,” he said.

In a research publication, he and his co-authors Dr Sudipta Ranjan Singha of AIIMS, Bhubaneswar, and Dr Indramani Nath of Veterinary College, OUAT, had brought out the plight of snakes trapped in trash beverage cans in 2016. The article was published in the international journal Wilderness & Environmental Medicine.