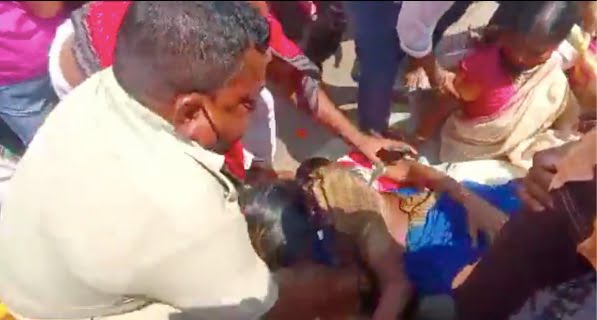 Puri: Heavy rush of devotees for darshan of sibling deities at Jagannath Temple in Odisha’s Puri, on the occasion of ‘Dola Purnima’, reportedly led to a stampede at Singhadwar (Lions’ Gate) on Friday.

According to sources, hundreds of devotees lined up at the Lions’ Gate to have darshan and offer puja to Lord Jagannath and His siblings at the temple from early morning. The queue stretched from the main entrance of the temple to Market Chhak.

As the devotees were waiting in the heat for several hours for their turn to go inside, the darshan was stopped for more than an hour for performing ‘Khaira Bhog’ rituals of the deities.

As soon as the gates were reopened after the rituals were completed, the devotees, who had lost patience waiting in the sweltering heat, broke the barricade and tried to rush inside. As a result, two devotees fell down and were almost trampled.

With the police deployed at Singhadwar failing to control the crowd, additional forces were rushed to the spot. They finally brought the situation under control. No major cases of injury were reported, the sources said.