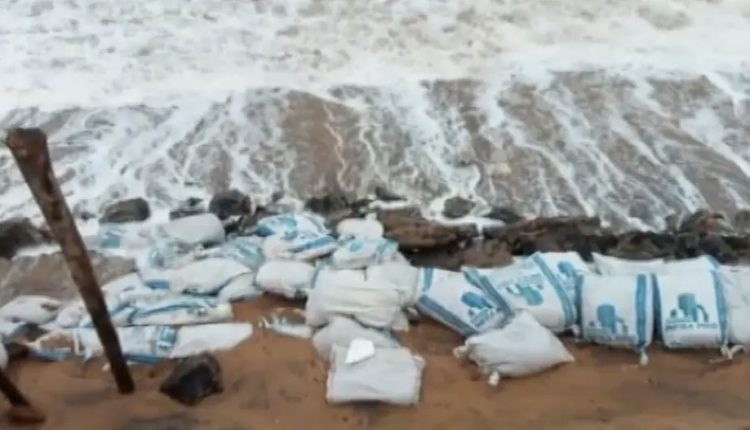 Puri: A stretch of the guard wall on Puri-Konark Marine Drive has been washed away by a powerful high tide, causing a threat to national highway number 316 which connects Puri with Konark.

Two electric poles were damaged under the impact of the high tide.

According to sources, the erosion took place near the location where the eco-retreat camp is being organised by Odisha Tourism. It is being feared that the sea may devour major portions of land, beaches and roads along the coastline.

“Strong sea waves have eroded dunes and ingressed 1,900 metres on Puri-Konark Marine Drive. Steps are being taken to prevent the devastation brought in by the marauding sea. Since yesterday officials and staff of the National Highway Authority of India (NHAI) are working to restore it using wooden poles and sandbags,” said Puri sub-collector Bhabatarana Sahu, who visited the spot to take stock of the situation.

Notably, the sea has been rough due to a depression over the Bay of Bengal and fishermen have been advised not to venture into the sea till September 13.

Mind The Bowlers, They Win Matches