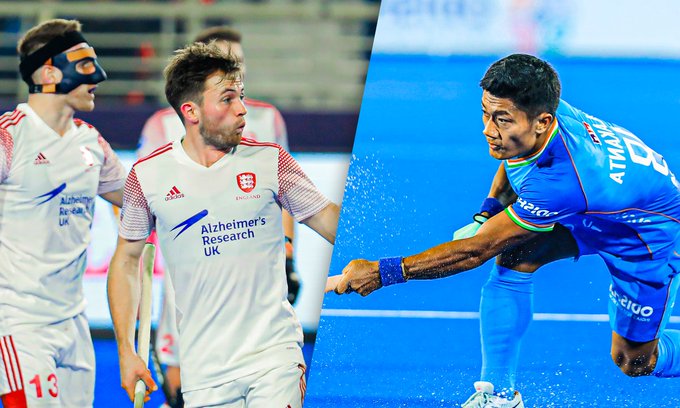 Rourkela: The Birsa Munda Stadium here could witness a thriller as India will take on England in its second outing at Odisha Men’s Hockey World Cup 2023 on Sunday with both teams having been involved in several close clashes in the recent past.

The match, which could be a crucial contest to determine the top spot in Group D and for getting direct access to the quarterfinals, will begin at 7 pm.

The Men in Blue have been placed second on the points table with three points after India’s convincing 2-0 win against Spain in their opener on Friday in which Odisha star Amit Rohidas played a stellar role, while England vanquished neighbours Wales 5-0 at the same stadium the same day.

The matches between India and England have always been very closely contested with the latter having exhibited the nerve of steel while facing a big lead. In the last 3 matches, India has won one while two were tied.

>> The last time India and England faced off was in a pool match at the 2022 Commonwealth Games in Birmingham when the latter scored three goals in the space of six minutes to hold India to a stunning 4-4 after India took a 3-0 lead, playing near-perfect hockey.

>> On April 2, 2022, Indian beat England 3-2 in a shootout in the first leg of their FIH Pro League 2021-22 tie at the Kalinga Stadium in Bhubaneswar after following a later equaliser by Sam Ward to make it 3-3 at full-time.

>> On April 3, 2022, ace drag-flicker Harmanpreet Singh scored a hat-trick to help India register a narrow 4-3 win over England in the second match of the double-leg FIH Pro League tie.

>> In August 2021, Eight-time gold medalists cruised to the Olympic semifinals, after a gap of 49 years, by scoring three field goals through Dilpreet Singh (7th minute), Gurjant Singh (16th) and Hardik Singh (57th) against England in the quarterfinals. Great Britain’s lone goal was scored from a penalty corner in the 45th minute.