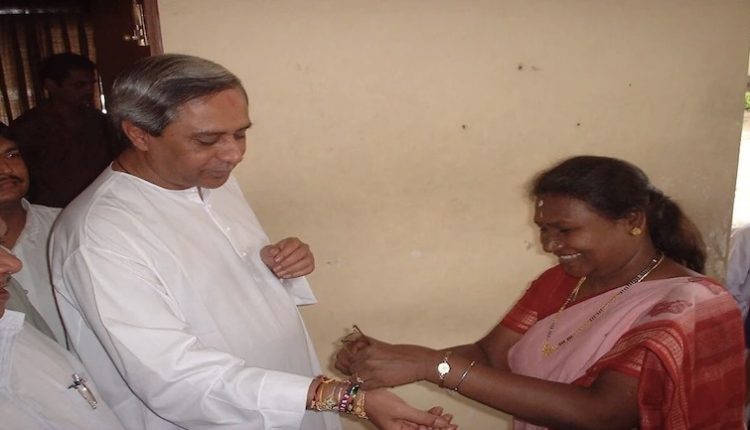 Bhubaneswar: While NDA Presidential candidate Droupadi Murmu is scheduled to file her nomination papers on Friday with the BJD extending support to the ‘Daughter of Odisha’, an old photo of hers tying a Rakhi to Chief Minister Naveen Patnaik has gone viral.

The picture dates back to 200o when Murmu was an MLA from BJP and the BJP-BJD coalition government was in power. She then held the Commerce and Transport, and, subsequently, the Fisheries and Animal Husbandry portfolios.

Murmu represented Rairangpur constituency of Mayurbhanj twice in 2000 and again in 2009 even as BJP was reduced to six seats amid a challenge put up by the by-then estranged BJD.

Stating that it was a proud moment for the people of the state, Naveen had earlier appealed to all members of Odisha legislative Assembly, cutting across party lines, to extend unanimous support to elect Murmu as the next President. Two ministers of his Cabinet – Jagannath Saraka and Tukuni Sahu – also signed her nomination documents in New Delhi on Thursday and will be present when she files her papers.

Murmu, who holds the distinction of becoming the first woman Governor of Jharkhand, will be the tribal woman to occupy the top constitutional post if elected. She belongs to the Santhal community in Mayurbhanj district.

The presidential election is scheduled for July 18 and the counting of votes, if required, will be conducted on July 21.