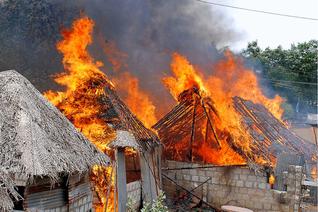 Dhenkanal/Paradip/Jagatsinghpur: Houses were reduced to ashed and assets worth lakhs lost in different fire mishaps across Odisha in the last 24 hours.

At least 10 houses were gutted after a massive fire broke out at Kendudhipa village of Dighi panchayat under Bhuban police limits in Dhenkanal district on Thursday.

It was sparked from a electric short circuit at Nrushinga Nayak’s house in the village early on Thursday morning. The blaze later spread very rapidly and engulfed 10 houses in the village. Properties worth lakhs of rupees were reduced to ashes in the fire mishap.

The victims have been demanded immediate compensation from the state government.

On being informed, Kamakhynagar fire brigade team reached village and brought the flames under control.

Notably, the entire properties of the victims except the clothes, which were wearing, were lost in the mishap.

Similarly, a major fire accident occurred at Bhanja Colony in Paradip on Wednesday in which three houses were gutted.

According to the sources, the mishap took place as a rocket cracker fell on one Panchanan Palei’s house. The blaze then spread to other houses. Properties worth of lakhs of rupees were lost in the mishap.

Before the fire brigade could reached the spot, the locals brought the situation under control.

Likewise, one house was gutted near Paradip film hall as rocket fell on it, the same day.

However, the locals managed to douse the flames.

in another fire mishap, three rooms of one Niroj Nalini Das were gutted at Charchika Bazar in Jagatsingpur district late on Wednesday.

Though the reason behind the mishap is yet to be ascertained, electric short circuit is suspected to have caused it.

On being informed, fire brigade team reached the spot and brought the situation under control.

Shopkepper On Cracker Sales This Diwali In Bhubaneswar