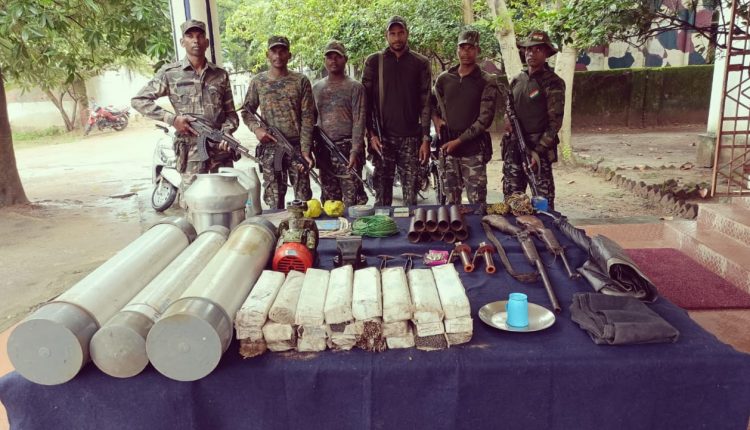 Malkangiri: Security forces have unearthed an arms dump of the Maoists and recovered a huge quantity of weapons, including explosive devices, from Judambo area of Odisha’s Malkangiri district, a police official informed on Saturday.

The operations led to uncovering of a major Maoist dump near the jungle area of village Arlingpada under Jantri Gran Panchayat on Friday, he said adding, a huge quantity of arms, Improvised Explosive Devices (IEDs) and welding equipment, besides several Maoist literature and other articles, were seized.

It is suspected that these articles were intended at making weapons and targetting civilians and security forces. This may well have been used against the security forces during Maoist Martyr’s Week, which remained incident-free this time, the SP said.

“We are suspecting that these explosives along with other articles belong to the Maoist cadres of AOBSZC and they were intended to be used against innocent civilians and security forces to carry out their subversive, anti-national activities,” he said.

In the wake of recovery, further combing and search operations are going on in the area. It is to be noted that Malkangiri District has remained incident free this year during Maosit’s Martyr’s Week, which ended on August 4. It is our solemn resolution to uproot all the Maoist activities in the district, the SP added.

Good News: NRIs Can Soon Pay Bills Of Their Families In India; Here’s How