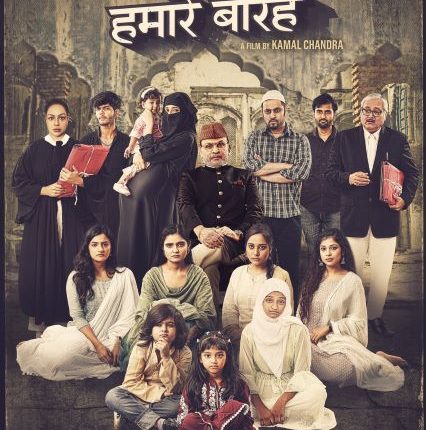 And within days of the release of Kamal Chandra-directed movie’s first poster, a controversy has erupted.

The poster shows veteran actor Annu Kapoor with his 11 children and pregnant wife, along with lawyers.

Annu and another person are seen wearing skull caps, while the pregnant lady is in a burqa, making it clear that the story is about a Muslim family.

Netizens took to social media to slam the filmmakers for targeting one community for rise in population.

“How does the censor board allow a film like this that depicts Muslims as the reason for population explosion and extends the relentless attack on the community. The brazen hate and Islamophobia when they use the image of a Muslim family and call it ‘Hum do Hamare Barah’,” tweeted journalist and columnist Rana Ayyub.

Another tweet by Kamran Chida said: “This Sanghi promoted, Bigoted film that depicts Muslims as the reason for population explosion and extends the relentless attack on the community. The brazen hate and Islamophobia when they use the image of a Muslim family and call it ‘Hum do Hamare Barah’.”

Director Chandra responded by saying the film should be seen in the ‘right perspective’ and assured that the film does not target one particular community.

“The film is based on the issue of population explosion. We are not hurting any community’s sentiments through the film nor are we biased towards any particular community,” Chandra was quoted as saying by India Today.

“I am sure that people will be happy that we have created a film about one of the most important issues of the current period. I appeal to people not to make an issue out of it. Population explosion is a serious topic and unless we address the issue we cannot make any progress,” he added.

The film’s lead player Annu defended the film, stating that people should watch the film and try to understand what the filmmakers have tried to explain through the film.

The film’s release date is yet to be announced.

Odisha: Dignitaries Who Will Unfurl Tricolour On Independence Day & Where; Check List

No Independence Day Parade This Year In Odisha In View Of COVID: Report