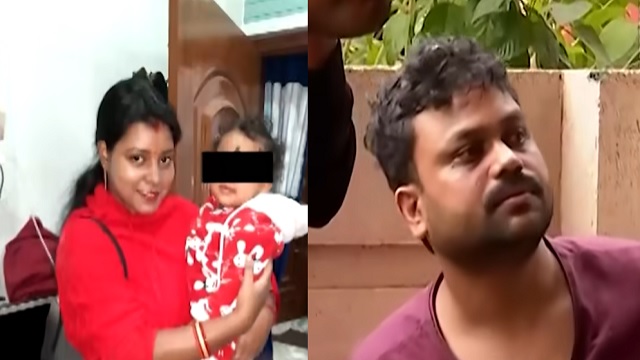 Cuttack: A day after a woman allegedly killed her 2-year-old stepson and hanged herself to death in Odisha’s Cuttack, the Twin City Commissionerate Police on Tuesday arrested her husband Santosh Khuntia.

According to sources, Santosh was arrested on the basis of a complaint filed by his wife, Shilpi’s family. He will be forwarded to court by Madhupatna police.

Santosh received a call from the owner of the rented accommodation, informing him that she was not opening the door on Monday morning. Shilpi was found hanging inside the house at Sriram Nagar within Madhupatna police limits on Monday. Her 2-year-old stepson Shivansu was also found lying in a pool of blood.

Preliminary investigation revealed that Shilpi allegedly killed her stepson by slitting his throat with a blade and then hanged herself. The incident was suspected to be the fallout of a bitter family feud.

Santosh married Shilpi of Netaji Nagar in the city in 2021 following the death of his first wife. Both Santosh and Shilpi were engineers by profession and worked with private companies. They were allegedly going through marital discord for the last few months. Her family alleged that Santosh had been torturing her which compelled her to take such a step. He was also financially dependent on her.

Shilpi’s Facebook profile with a display picture reading, “I quit. Because that was the only option. Until…”, hints that she was under extreme mental duress.

Meanwhile, Santosh claimed that her family was torturing him. He said that Shilpi used to accuse her mother-in-law of performing black magic on the minor kid. Santosh’s father Janakinath Khuntia has filed an FIR with the local police against Shilpi for the murder of his grandson while the deceased woman’s father Gyanendra Kumar Das lodged a complaint alleging mental and physical harassment on basis of which two separate cases were registered.