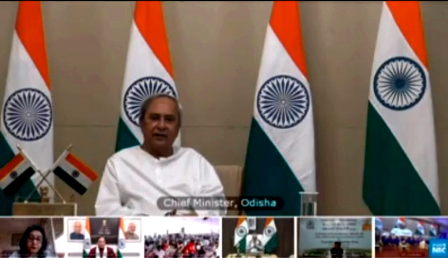 Sambalpur: Chief Minister Naveen Patnaik on Saturday hailed the Indian Institute of Management (IIM), Sambalpur for “casting its positive impact” on the hierarchy of educational institutions in Odisha.

The CM said this at a virtual function for the laying of the foundation stone for a permanent campus of the institute by Prime Minister Narendra Modi.

Naveen said IIM, Sambalpur, which was set up in 2015, has already proved its mettle as one of the premier management institutions in the country.

Stating that Odisha has a tradition of educational excellence since ancient times, he said the state continues with its dominance in the education sector.

“With the establishment of IIM, IIT, NISER, IISER, AIIMS, NLU and many other Institutions of national importance, Odisha is emerging as a leading research hub of the nation,” he added.

The CM further said the state government accords the highest priority to the development of human resources as the “Skilled in Odisha” has already become an international brand. “Our focus is to train our youth in the latest technology and technical know-how, and to make them market-ready as per the demands of Industry,” he pointed out.

Expressing happiness over the efforts of IIM, Sambalpur to become the leading entrepreneurial hub in Odisha, Naveen laos congratulated the chairman, director, faculty and staff of IIM, Sambalpur for their commitment to make it one of the best management institutions of the country.

He informed that the institute has signed an MoU with the Ministry of Small and Medium Enterprises with emphasis on nurturing the entrepreneurial talent of local weavers and agro-based businesses as well as to incubate start-ups in these areas in line with the resolve of the state government to ensure inclusive, equitable, and sustainable development in the state.

The CM further said that with the support of the Prime Minister, more and more central institutes will come to Odisha and this will expedite the growth trajectory of the state.

The state government has provided 200 acres of land for the construction of the proposed campus at Basantpur on the outskirts of Sambalpur city. The Ministry of Education has granted Rs 401.97 crore for the project which will be completed by April 2022.

The proposed campus will be equipped with state-of-the-art infrastructure with energy-efficient green features as per GRIHA standards. It will be a green campus with maximum usage of renewable energy.

[Watch] Vaccination Dry Run In Odisha: All You Need To Know