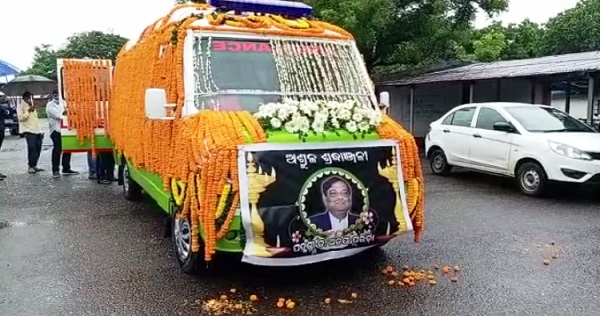 Bhubaneswar: The body of Dr Ajay Parida, Director of the Institute of Life Sciences (ILS) in Bhubaneswar, who passed away in Guwahati on Tuesday, reached Odisha’s capital on Wednesday morning.

The body arrived here on a special flight.

His family members were present at the Biju Patnaik International Airport (BPIA) to receive the body, which was taken to his residence in Bhubaneswar. Dr Parida’s body will be later taken to the ILS office, where arrangements have been made for officials and employees to pay their last respect to him.

His last rites will be performed at his native place Bhagabanpur in Jajpur district with full state honours later on Wednesday.

Dr Parida was in Guwahati to attend a conference. He passed away following a heart attack.

Expressing grief over his death, Chief Minister Naveen Patnaik said that Dr Parida, who was awarded the Padma Shri, contributed immensely during the COVID-19 pandemic.

“Dr Parida played a pivotal role in raising the standards of ILS and giving it a distinct identity at national and international levels,” Naveen said.

The nation has lost an eminent scientist today, the CM added.

Deeply saddened to learn about the passing away of Padma Shri awardee scientist and Director of Institute Of Life Sciences (ILS), Bhubaneswar Ajay Parida. My thoughts and prayers are with the bereaved family members and friends in this hour of grief. Om Shanti.