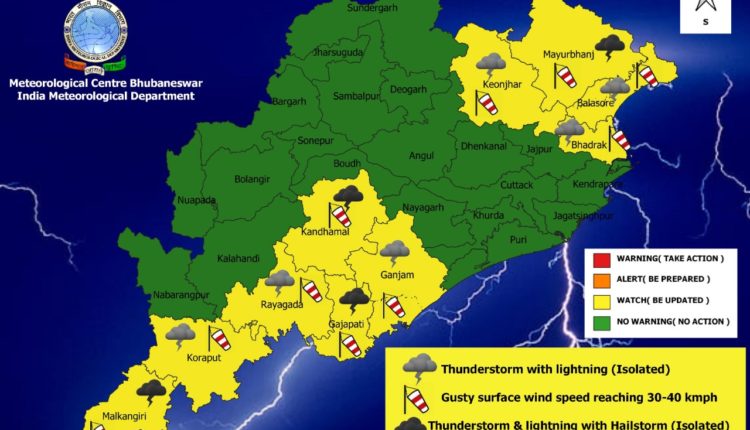 Bhubaneswar: The India Meteorological Department (IMD) on Friday issued a five-day yellow warning for rain and thundershower with lightning and strong wind for 14 Odisha districts from today.

The national weather agency, in a mid-day bulletin, said under the influence of a cyclonic circulation over northeast Madhya Pradesh & neighbourhood, there will be thunderstorm with lightning and gusty surface wind speed reaching 30-40 kmph at one or two places. Such conditions will prevail till May 5, it added.

The IMD has issued yellow warning for the following districts.

Temperature forecast: The Met office stated that there will no large change in maximum temperature (day temperature) during next 2 days and it is likely to fall thereafter by 2-3 degree Celsius at many places.

Bhubaneswar will remain mostly cloudy y with possibility of
development of thunder or lightning. Maximum and minimum temperature likely to be around 39 degree C and 27 degree C respectively, the bulletin stated.

No Curbs On COVID Complaints On Social Media: Supreme Court