Include Four Tribal Languages From Odisha In 8th Schedule of Constitution, BJD To Urge President 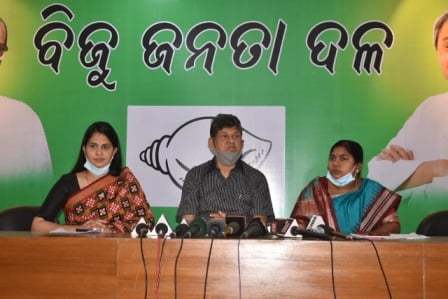 Bhubaneswar: The Biju Janata Dal (BJD) will request President Ram Nath Kovind for the inclusion of four tribal languages in the 8th Schedule of the Constitution.

The party will make the request during the President’s three-day visit to Odisha, BJD General Secretary Shreemayee Mishra and MLAs Soumya Ranjan Patnaik and Basanti Hembram told the media on Saturday.

Mishra said the Scheduled Tribe (ST) population in Odisha is about 22.85 per cent which comprises 62 ST communities who mostly use Ho and Mundari as their mother tongue.

Stating that the fight for languages has been continuing in Odisha since the British regime, they said though the political parties had promised to raise their demand before the Centre for the inclusion of tribal languages in the eighth schedule of the Constitution, there has been no initiative taken by them till date.

They said that as the BJD has completed the constitutional formalities on this matter, they will take up the matter with the President during his visit to the state.

Promise To Set Up A ‘Ministry Of Happiness’ In This Election Manifesto!