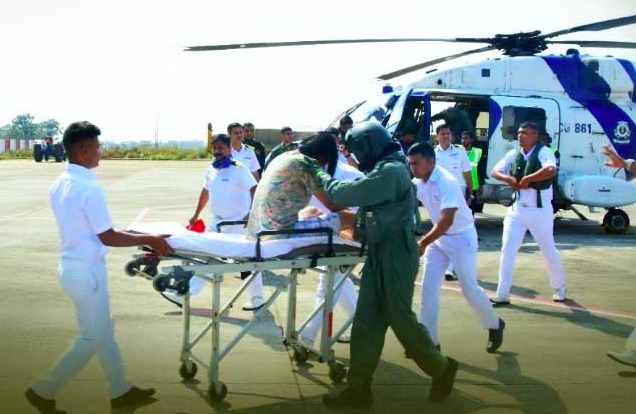 Bhubaneswar: Indian Coast Guard on Monday undertook an extremely long-range medical evacuation and rescued a Myanmar sailor from mid-sea. He has been admitted to a private hospital in Odisha capital.

The Myanmar national, Than Htike Lwin, was onboard MT GB Venture, which had reached near Sagar Island from Singapore.

According to sources, Indian Coast Guard personnel received input from Sagar VTMS regarding an injury to a Myanmar crew onboard MT GB Venture this morning. The condition of the patient was assessed to be critical, requiring medical evacuation.

The rescue operation was carried out with an indigenous Advanced Light Helicopter deployed at the Biju Patnaik International Airport (BPIA) in Bhubaneswar around 8.55 am. The aircraft reached near the merchant vessel at 10.10 am and the patient, who had suffered injuries to his abdomen, was rescued.