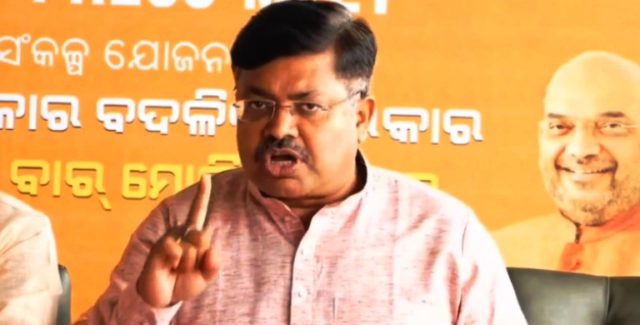 Bhubaneswar: Stepping up its attack on BJD government in Odisha over Pradhan Mantri Awas Yojana (PMAY), BJP accused it of excluding eligible people from beneficiaries’ list and including names of ruling party supporters through a conspiracy.

Alleging that the PMAY list has been prepared to favour BJD supporters and activists BJP state general secretary Pritiviraj Harichand said the saffron party would launch a vigorous statewide agitation if the state government fails to mend ways.

Asserting that BJP will not allow the BJD government to deprive any eligible person from getting PMAY house, he said names of all eligible people must be included in the list of beneficiaries.

Similarly, the names of people who are not eligible must be deleted, he said. Tomorrow is the last date of filing complaints regarding the list prepared for PMAY beneficiaries in the state.

The senior BJP leader said the party will submit “Chetabani Patra” (letters of warning) for the Chief Ministers at all the 314 block offices on January 25. If the state government goes ahead with inclusion of ineligible people in the list, BJP will intensify its agitation across the state, he said.

BJP workers will gherao all block offices in the state on January 31 if the state government fails to stop irregularities in PMAY list, Harichandan said.

Referring to free rice scheme for the poor under NFSA, he said posters and banners will be put up at all fair price shops and retail centres across the state thanking Prime Minister Narendra Modi for the Centre’s historic decision to provide free rice for Odisha’s 3.25 crore people. The party will take necessary steps to prevent BJD from misleading people on free rice scheme.