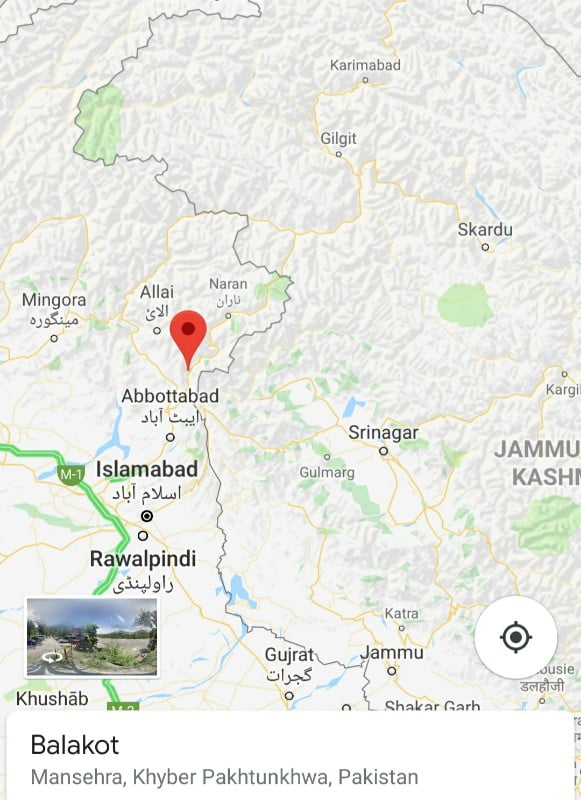 New Delhi: Indian fighter jets not only crossed the Line Of Control but also went deep inside Pakistan and struck at Balakot demolishing a Jaish-e-Mohammad centre there. This was the first time since the 1971 war when IAF fighter pilots crossed into Pakistan to carry out a “non-military preemptive strike”.

1. While making the official announcement of the attack, Foreign Secretary Vijay Gokhle in his briefing on Tuesday morning made a clear case for striking Balakot.

2. He said: “In an intelligence-led operation in the early hours of today, India struck the biggest training camp of JeM in Balakot. In this operation, a very large number of JeM terrorists, trainers, senior commanders and groups of jihadis who were being trained for fidayeen action were eliminated. This facility at Balakot was headed by MAULANA YOUSUF AZHAR (alias USTAD GHOURI), the brother-in-law of MASOOD AZHAR, Chief of JeM”.

3. Balakot is in Mansehra district of Pakistan. JeM operates the largest military training centre here since 2001. About 10,000 recruits are trained here at a time. It has several madrassas, masjids and control rooms, from where several operations were planned. JeM chief Masood Azhar and his brother Abdul Rauf Asghar are said to be supervising these camps.

4. Balakot has also found mention in many interrogation reports, and even the Pathankot chargesheet, calling it a major terror training camp of the Jaish. According to investigators, the Jammu and Kashmir Assembly blast of 2001 too was planned in Balakot.

5. News portal The Print quoted a source saying “It (Balakot) emerged as a very strategic location as it was closer to both PoK and Khyber Pakhtunkhwa. A lot of land was donated to Masood and money was given to develop infrastructure to train jihadis. In just a few years, it became a major military recruitment centre for the Jaish”.

6. “Jaish-e-Mohammed follows the Deobandi school of thought, and is thus aligned with the Taliban. Before 2001, the training of its members took place in Afghanistan. However, after the Taliban were toppled, it had to be relocated,” The Print said quoting sources.

7. The job to relocate the Jaish fell upon on Pakistan’s intelligence agency, ISI. As Lashkar-e-Taiba was strong in Pakistan, it did not want the Jaish to eat into the LeT’s space, and so relocated it to Manshera district, closer to PoK. This facility at Balakot was headed by Maulana Yousuf Azhar (alias Ustad Ghouri), the brother-in-law of Masood Azhar.

8. The attack was carried out by 12 Mirage 2000 jets, whose lethal capabilities was demonstrated at in the 1999 Kargil war.

9. India’s has more advanced fighter jet such as Russia made Sukhoi Su30MKI. But its speed is 2120 kmph (Mach 2)  which is slower than the Mirage-2000 and is heavier too. This gives the Mirage-2000 an advantage in quick operations.

10. The Mirage 2000 has a fly-by-wire flight control system and has a Sextant VE-130 HUD, which displays data related to flight control, navigation, target engagement, and weapon firing. In terms of the armament, the Mirage 2000 can carry laser-guided bombs, air-to-air and air-to-surface missiles and has a Thomson-CSF RDY (Radar Doppler Multi-target) radar on board.