Indoo Ki Jawani Is An Utter Test Of Patience 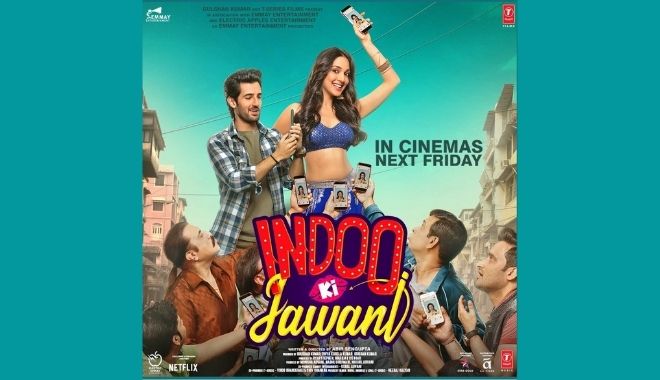 Let’s put it in very simple words. Indoo Ki Jawani by debutant director Abir Sengupta is an immensely bad film. The review ends here as writing anything beyond this point is redundant and is a waste of your time. But we will continue if you also want to vent out the frustration of throwing away 2 hours.

Kiara Advani’s Herculean level of overacting (is there an acting school which teaches you to produce Avogadro’s number of expressions in the shortest time possible?) is only slightly less unbearable than a profoundly dumb script. The eponymous Indoo who is the object of desire of nearly every man in Ghaziabad plans a one-night stand with a person she met on a dating site to get back at her ex-boyfriend. The trouble brews when the said date turns out to be a Pakistani man on a trip to India. Indoo turns out to be a massive bigot who engages in sporadic idiotic verbal duels with the Pakistani guy. The writers surely thought the dialogues were humorous but they can only be described as trying to tickle someone with a razor.

The movie, unintentionally, is actually an advertisement of how much of a Neanderthal are Indian men. Indoo is zealously pursued by lecherous middle aged men, more than twice her age and teenagers alike with complete disregard of any social and moral boundaries. In one scene, her drink is spiked with alcohol by one of the teenagers and she eventually passes out. This is supposed to be funny. This. In a country where women have to carry car keys in a fist when they are walking alone at night. The tone deafness continues unabated throughout the film as men make cringe-worthy efforts one after the other to sleep with Indoo. Even a veteran actor like Rakesh Bedi (Chashme Buddoor, Yeh Jo Hai Zindagi) had to play a caricature like role. Abir Sengupta needs friends whose only job is to put their palms on their faces at all his jokes.

The only non-annoying character in the movie is ironically the Pakistan man in Uttar Pradesh, played by Aditya Seal. This makes me wonder of the generosity of the present UP Government in allowing a film to show a sympathetic Pakistani Muslim man or maybe they found the movie so unwatchable that even they gave up after 30 minutes. The UP Police are also shown in a favourable light with a proper justification of extrajudicial custodial deaths.

This film is a pandemic era film and the only explanation that sounds feasible for this utterly drab final product is that everyone in the cinema industry needed some form of work and made do with whatever creative inputs an idle mind in lockdown could fathom. It is cringe art and unfortunately not one of those self-aware cringe arts.

Why Does Happiness Elude Us?