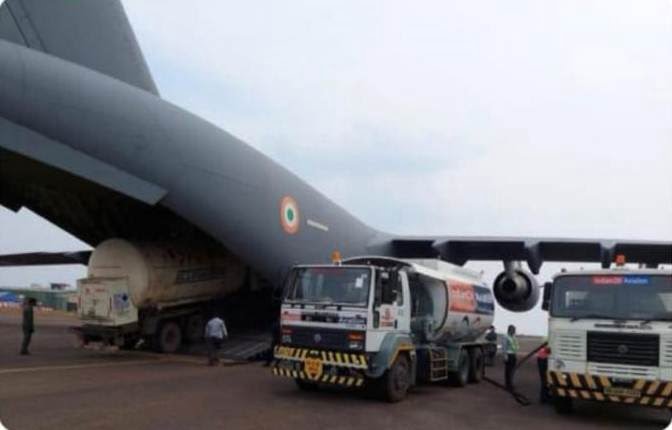 Bhubaneswar: The Indian Oil Corporation Ltd (IOCL) has come forward to help COVID patients struggling for life in several hospitals in the country due to an acute shortage of medical oxygen.

In a Twitter post, the oil major has said that it would refuel the C-17 aircraft of the Indian Air Force (IAF) at the Biju Patnaik International Airport in Bhubaneswar to carry back the tankers loaded with oxygen from various plants across the state.

#IndianOil is humbled to be a helping hand in the Nation’s hour of need; refuels C17 aircraft of @IAF_MCC at Bhubaneswar; the aircraft will carry back tankers loaded with Oxygen from various Oxygen generating plants across Odisha. pic.twitter.com/A8TsVMl5sd

It may be mentioned here that the Delhi Chief Minister Arvind Kejriwal had praised the gesture of his Odisha counterpart Naveen Patnaik for his assurance to facilitate the movement of medical oxygen tankers to meet the urgent requirement of the major hospitals.

A total of 29 tankers/containers carrying about 510 MT of medical oxygen have been despatched to Uttar Pradesh, Madhya Pradesh, Delhi, Haryana, Maharastra, Telengana, and Andhra Pradesh in the last 24 hours. Eight more will be leaving later on Saturday.

India’s Dead Due To Lack Of Oxygen In Hospitals: Know Where & When?

4 From UP Held For Diesel Theft From IOCL Pipeline In…