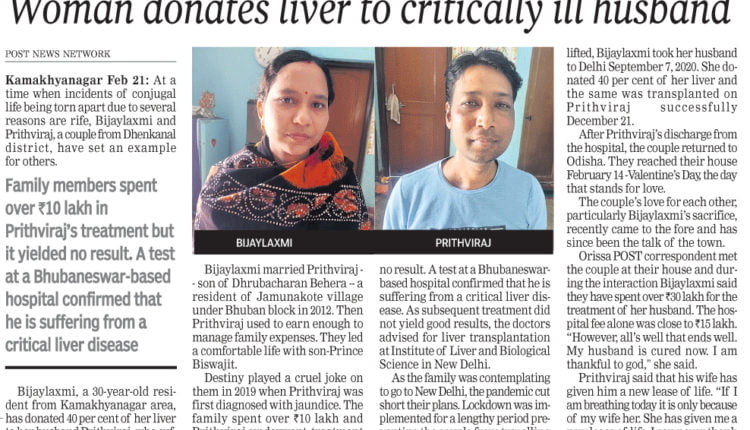 Dhenkanal: ‘Jaan-e-jigar’ is a common term of endearment used by those in love. But it means very life for a couple in Odisha.

A woman in Dhenkanal district has donated her ‘jigar’ (liver) to save the ‘jaan’ (life) of her critically-ill husband.

According to reports, Bijaylaxmi, a 30-year-old resident of Kamakhyanagar, has donated 40% of her liver to save the life of her husband Prithviraj, who suffered from an incurable disease.

The couple had got married in 2012 and even have a son named Prince Biswajit. While Bijaylaxmi was a homemaker, Prithviraj earned just enough for the family to lead a comfortable life.

Then tragedy struck in 2019. Prithviraj fell ill and doctors diagnosed it to be jaundice. But even after undergoing treatment for almost a year, there was no improvement in his condition.

Later, a test at a Bhubaneswar hospital revealed it to be a critical liver disease. The doctors advised Prithviraj to undergo a liver transplant at the Institute of Liver and Biological Science in New Delhi.

But even as the couple was planning to go to Delhi, the pandemic struck and lockdown was imposed. There was no way for them to travel to Delhi.

Finally on September 7 last year, Bijaylaxmi managed to take Prithviraj to Delhi. She donated 40% of her liver, which was then successfully transplanted to her husband on December 21.

Since then, the couple’s enduring love and Bijaylaxmi’s sacrifice have been the talk of the town.

Speaking to the media, Bijaylaxmi mentioned that they have spent around Rs 30 lakh on her husband’s treatment. This included the hospital bill of Rs 15 lakh. “But all’s well that ends well. My husband is cured now. I am grateful to god,” she added.

On his part, Prithviraj said his wife has given him a new lease of life. “If I am breathing today, it’s only because of Bijaylaxmi. I can never thank her enough,” he said,

Yeeks! You’re Bound To Throw Up After Watching This Video!