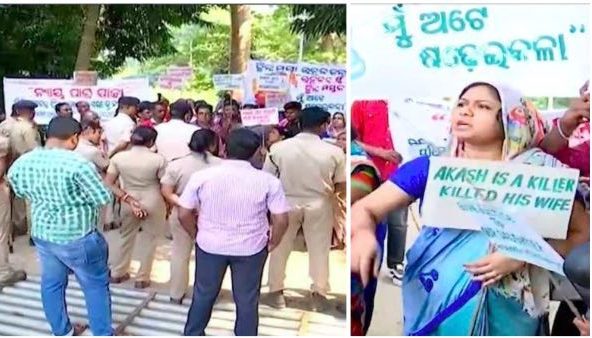 Bhubaneswar: Bereaved family members of a woman from Sareikela area of Jharkhand on Thursday gheraoed local police station alleging that she was murdered by her in-laws at Ranga Bazaar in Balianta, on the outskirts of Odisha capital.

According to sources, they along with hundreds of villagers and members of Utkal Janai Sangha took out a rally this morning and staged a demonstration at the police station, demanding action against the in-laws of the deceased.

Questioning police inaction and attempts to hush up the case, they alleged that Seema Sahu was murdered on September 24 by her in-laws, who are now trying to pass it off as a suicide case. The sister of the deceased woman further alleged that police had taken bribes and showed no interest to investigate the case since they are from Jharkhand.