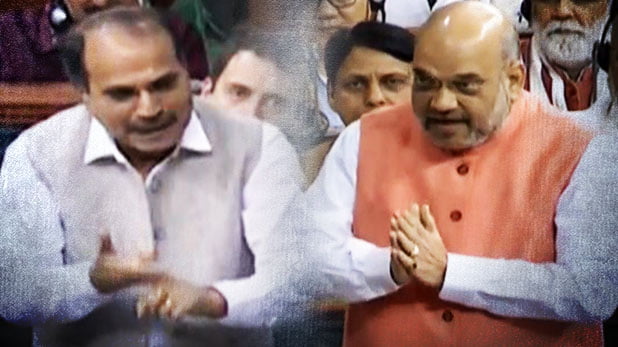 New Delhi: Adhir Ranjan Chowdhury, the Leader of the Congress in Lok Sabha, has left his party deeply embarrassed by appearing to suggest that Jammu and Kashmir was not an internal matter for India.

The Congress leader’s self-goal came during the debate on the government’s move on J&K in Lok Sabha on Tuesday.

The Congress leader said the government had thrown rules and regulations out of the window by proposing to create two Union Territories out of J&K.

A furious Home Minister retorted: “General statements should not be made. This is the biggest panchayat of the country. Please tell us which rules have been violated. I will respond to them.”

Amit Shah shouted back: “You don’t consider J&K as an integral part of India? I want to make it very clear that J&K is an integral and inseparable part of India. There is absolutely no doubt over it, and there is no legal dispute on this.”

Chants of “Bharat Mata ki Jai” and “Vande Mataram” erupted from the government benches at that statement.

Chowdhury later clarified that he was misunderstood and quoted out of context.

All Parks In Odisha To Remain Open Till 9 PM