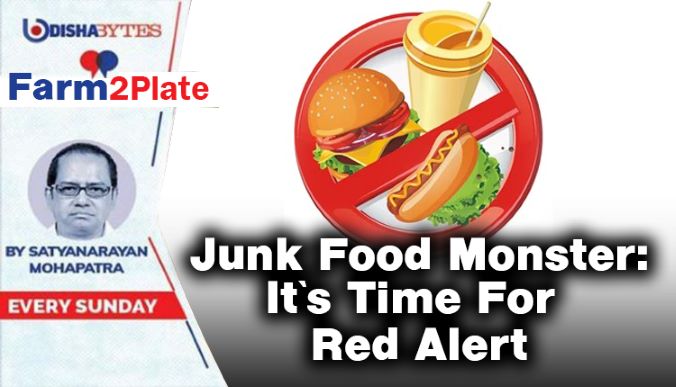 The other day I was at my daughter’s school and all the parents were concerned about their wards regarding weight, fatigue, concentration and the list was long. Being a consulting nutritionist and dietician, I laughed to myself and took pity on the parents. Not only we ourselves are to be blamed, but also others who are having an ostrich approach. I have tried talking to the counsellors at school and the parents, but we are in a catch 22 situation.

Is it time to press the panic button?

We have two situations here – the food manufacturers blatantly sell products that have unhealthy levels of nutrients and the nexus between the industry and regulating agencies that is backing this brazen act.

Today India needs a robust law on labelling and disclosure of nutritional information on food packs. The existing Food Safety Standards (Packaging and Labelling) Regulations, 2011, are too weak and ineffective. The mandatory salt disclosures are not even mentioned – it is just that we are not following the statutory framework, the reason being the junk food mafia. Your guess is as good as mine.

The Food Safety and Standards Authority of India (FSSAI), the country’s food regulator, set up an expert committee to regulate junk food available in schools following an order of the Delhi High Court. Earlier, Uday Foundation, a non-profit organisation, had demanded a complete ban on junk food in and around schools in a public interest petition.

Then the expert committee, comprising doctors, nutritionists, public health experts, civil society and industry, suggested labelling of calories, sugar, fat, saturated fat and salt on the front of food packs, or FoP. This would help people make an informed choice about the food they eat.

The report was not “convenient” as mentioned by some vested group members and thus, a second committee was set up by FSSAI to assess the consumption of fat, salt and sugar and its health impacts. This panel endorsed the recommendations made by the first committee suggesting to resolve ambiguities on the correct serving size of packed and fast foods and the exact nutritional value of the food served.

A serving size refers to the quantity of food typically consumed in one go. It varies for different food categories. For instance, it’s 30 g for chips, 35 g for namkeen and 60 g for instant noodles. The problem is that more often the size of packets does not match the serving size. For instance, a 52-g or 60-g pack of chips can declare 30 g as the serving size. This leads to excess consumption. In case of fast foods, one ends up eating an entire burger. The serving size can be kept simple – a handful, a spoonful or a cupful which is easier to understand. This will never happen – just that it makes the consumer confused and get them addicted.

Suddenly out of the blue, FSSAI was ready with the draft for Food Safety Standard (Labelling and Display) Regulations, 2018. The draft sought mandatory declaration of salt as sodium chloride. Until now, salt did not figure in food labels. It also proposed the FoP label, a key element of consumer information in the world. The upper part of the label would disclose the quantum of calorie, total fat, total sugar, trans fat and salt, and the bottom part would declare how much each of these contributes in percentage to the Recommended Dietary Allowance (RDA). FSSAI has set RDA considering that one person requires 2,000 kilocalories in a day. The draft proposed to mark red on all nutrients that exceed thresholds.

This was a huge movement ahead as implementation of this notification would have changed the rules that allow food companies to rule our kitchens and stomachs. At least now, we have a choice to know the quantum of salt, sugar or fat in the food we consume, not just in terms of quantity, but in terms of how much of our daily intake would get exhausted. But this was a tangent for industry honchos.

The former chief executive of FSSAI had said, “Industry does not want the food to be labelled red, which represents danger.” Later, a new committee was formed but the recommendations of this committee were never made public. In July 2019, FSSAI came up with a draft regulations which are implemented. The present regulation is a much diluted version presumably to keep the powerful food industry happy.

For the road: food is not the business for health but for profit.