[Watch] Justice U U Lalit Sworn In As CJI 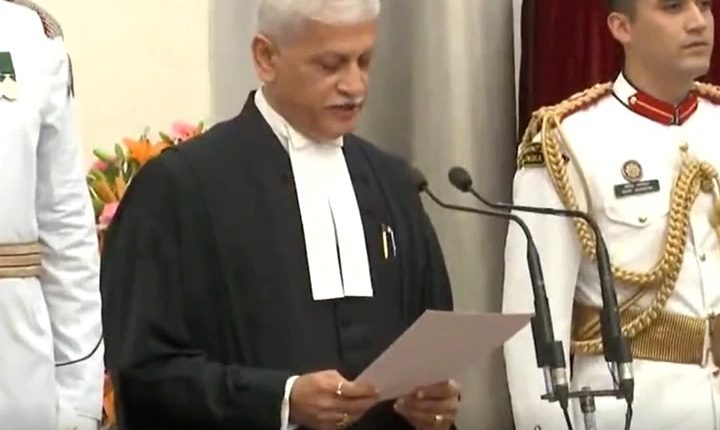 New Delhi: Justice Uday Umesh Lalit was on Saturday sworn in as the 49th Chief Justice of India.

President Droupadi Murmu administered him the oath at a brief ceremony held at the Rashtrapati Bhavan.

Justice Lalit will have a 74-day tenure since he is slated to retire on November 8.

Ahead of taking oath as CJI, Justice Lalit had reportedly said he would strive hard to ensure that at least one constitution bench is functioning in the Supreme Court throughout the year. Two other areas — listing cases for hearing in the apex court and mentioning urgent matters – would also be in focus.

Speaking at a function organised by the Supreme Court Bar Association (SCBA) to bid farewell to outgoing CJI N V Ramana on Friday, Justice Lalit said he has always believed that role of the top court is to lay down law with clarity and the best possible way to do it is to have larger benches as early as possible.

Therefore, there will always be at least one constitution bench functioning all through the year, he said.

Justice Lalit said one of the areas in which he intends to work is about the listing of cases before the constitution benches and matters which are specially referred to three-judge benches. “I must assure you that we will strive hard to make the listing as simple, as clear, and as transparent as possible,” he said.

On mentioning urgent matters, Justice Lalit said he would certainly look into it.

Hailing Justice Ramana, who had become the CJI on April 24 last year, Justice Lalit pointed out two “stand out” achievements, including that over 250 appointments of judges in the high courts across the country were made as a result of recommendations made by the apex court collegium in the last about 14 months or so.

Justice Ramana had also meticulously and very forcefully tried to persuade all the chief ministers and chief justices to concentrate on issues concerning infrastructure in the district and lower judiciary, he said.