Kalpavigyan: An Exploration Into The World Of Indian Science Fiction 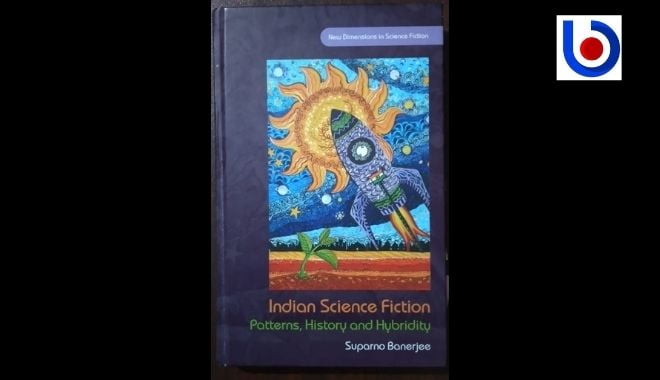 Published in 2020, Suparno Banerjee’s Indian Science Fiction: Patterns, History and Hybridity provides a major breakthrough in studies in Indian Science Fiction (ISF), highlighting previously unexplored origins and historical developments. The book is remarkable in its attempt to outline a brief history of Indian science fiction by sifting through the multilingual fabric of the Indian subcontinent. Exhuming and examining a diverse body of work produced in four languages, English, Hindi, Marathi and Bengali, Banerjee charts a cohesive history of regional science fiction in India and shows how ISF is primarily a product of cultural interactions and exchanges.

Structure of the book

Spread over five thematically-arranged chapters, and with an Introduction and Conclusion, Banerjee’s book is a compelling account of the nature of science fiction writing in India and its distinctiveness as a category. A chronology of significant publications, nominations and awarded texts from 1835 to 2019 precedes the Introduction to give a bird’s-eye view of the extent and range of Indian science fiction. Banerjee unfolds the story of Indian sci-fi in four phases: 1835 to 1905, 1905 to 1947, 1947 to 1995, and 1995 to 2019.

Banerjee’s chief aim in the book is to advance an exclusive definition of Indian science fiction. For Banerjee the discourse on Indian science fiction is largely fuelled by the “varying connotative associations between ‘vijnana’ and ‘science’.” Drawing in the main from critics like Bodhisattva Chattopadhyay, Banerjee diverts our attention to the binary of ‘jnana’ (knowledge)/ ‘vijnana’ (science) and formulates ‘kalpavigyan’ (‘kalpa’ derived from the word ‘kalpana/imagination) as the most suitable term to capture the essence of Indian science fiction. Reiterating Chattopadhyay, Banerjee highlights “the specificity of ‘vijnana’ against the transcendental holism of ‘jnana’” and claims that in the Indian context ‘vijnana’ often provides a pathway to a greater transcendental knowledge of the world, and hence ‘science’ must be understood in the context of the specific society in spite of its universalizing tendencies (6-7).

The Distinctiveness of Indian sci-fi

The book claims that the uniqueness of Indian science fiction derives from the way it imparts knowledge through tradition. This aspect of Indian science fiction which favours modernism by experimenting with tradition and mythology is one of great salience. Banerjee has demonstrated in a masterly manner the osmotic relation between science and Vedic philosophy. By giving credit to Indian science fiction writers such as Satyajit Ray, Adrish Bardhan, Narayan Sanyal, Shirshendu Mukhopadhyay, Laxman Londhe, Chintamani Deshmukh, Aurobind Mishra, Rajiv Ranjan Upadhyay and Laxminandan Bora he has successfully bridged the gap between the ‘spiritual East’ and the ‘materialist West’.

Since mythology forms an important aspect of Indian culture, our Vedas, Puranas, folk tales, epics and rituals have influenced regional literary works as well as Indian English Literature. In the case of science fiction, it would be hard to incorporate the elements of mythic fiction in narration as it is generally assumed that mythology and science work at cross purposes. However, Banerjee’s book impressively presents a section on mythic fiction, enlisting the corpus of deserving but lesser-known mythic science fiction works. Thus, the incorporation of Hindu myths and Buddhist myths into the discourse of science fiction is an important contribution of this book to science fiction studies. The book not only provides an engaging history of science fiction in its blend with mythology but also draws the readers’ attention towards recent publications under this category. It credits Vandana Singh and Anil Menon for editing Breaking The Bow (2012), a collection of science fiction and speculative fiction inspired by the Ramayan, which was nominated for the 2013 Locus Award.

A major strength of the book is that it provides insights on women writers. Banerjee sketches a vivid picture of women writers and their contributions to Indian sci-fi in general and mythic fiction in particular. He credits Begum Rokeya Shakhawat Hossain as the first feminist utopian writer and gives an overview of the works of writers like Leela Majumdar, Vandana Singh, Manjula Padmanabhan, Rimi B Chatterjee, Vina Jie-Min Prasad, Mimi Mondal, Priya Sarukkai Chabria and S B Divya. Especially noteworthy in this context is the provision of a detailed account of thematic designs executed by women on gender issues, climate change and an alternative model of progress in India. Although Banerjee does not chalk out a separate category for women writers, his book seems to be the only publication so far that has tried to take the measure of feminist-inspired science fiction in India.

Indian Science Fiction: Patterns, History and Hybridity is an important intervention in the ongoing research on science fiction in the Indian context,with significant points of intersection with postcolonial discourse and emerging genres.  Banerjee’s book will serve as an academic touchstone and a reference point in the field of Indian science fiction studies for a long time to come.

Colonel & His Family Among 7 Killed In Deadly Ambush In Manipur

Book Review: What The Critical Thunder Said; Lessons From The Past