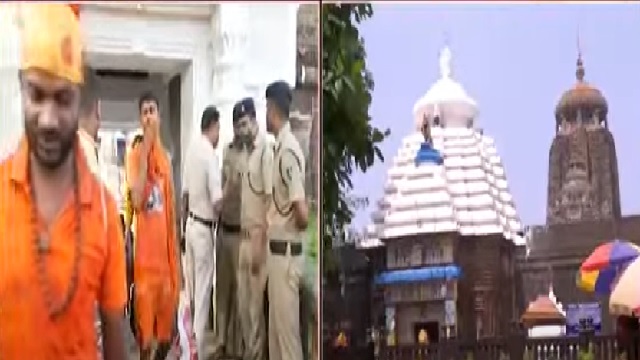 Bhubaneswar: On the last Monday of the holy month of ‘Shravan’, also known as ‘Sesha Somwaar’, a huge rush was witnessed in the Lord Shiva temples across Odisha.

In view of the gathering of devotees, a large police force has been deployed outside Lingaraj temple in Bhubaneswar. Like every year, knives, polythene, and plastic items are prohibited inside the temple.

“We have heard a lot about the famous Lingaraj temple. We are lucky that we could visit the temple this year. For the last two years, we could not visit due to COVID restrictions. Although we live in Kolkata, we began our Kanwar yatra from Balasore’s Gadgadia and decided to offer water Lord Lingaraj,” said a Kanwariya to a local media.

“We liked the security arrangements made by the administration due to which we could offer water to Lord Lingaraj very smoothly,” said another Kanwariya.

Likewise, a heavy crowd was also witnessed at Baba Akhandlamani’s temple in Bhadrak and at Singhanath Temple in Badamba of Cuttack as thousands of people were standing in long queues for offering water to Mahadev. The district administrations made elaborate security arrangements today.