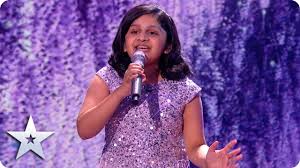 Bhubaneswar: “I can’t remember the show opening with someone getting a standing ovation,” said judge David Williams after Souparnika Nair’s performance.

Kerala-origin, Souparnika did not leave any choice for the judges but to rise from their seats in the semi-finals performance of ‘Britain’s Got Talent’ as she sang ‘Neverland.’

The judges were all praise for the 10-year-old’s composure and breathtaking performance.

Perhaps Nair would not have made it this far if judge Simon Cowell had not stopped her in the middle of her auditions and asked to change the song.

She started off with Judy Garland’s famous ‘The Trolley Song’. But, judge Simon Cowell asked told her to sing a song from ‘The Greatest Showman’ instead. The judges gushed after that performance with Simon praising her as a ‘gusty little thing’.

Her performance was also applauded by musical maestro A.R. Rahman. He tweeted with a video of the performance, “Nice to wake up to this.”

Nair first came to national limelight after she made a splash on the acclaimed BBC ‘Big Show’ hosted by comedian Michael McIntyre. She is the youngest person ever to be featured on the show.

Born to Ranjitha and Dr. Binu Nair, a medical professional with the National Health Services (NHS), the family migrated to the UK in 2014. However, Souparnika was born in Trivandrum, Kerala. She developed an interest in music at the age of two and by five she started performing in school talent shows.

Moreover, she has learned to play the piano and has been performing in music festivals and public concerts.

She went viral with her rendition of Vande Mataram at the age of six.

Regarding her semi-final act, a public vote will decide if Souparnika has made it to the finale round or not. Until that comes out, enjoy her performance here.