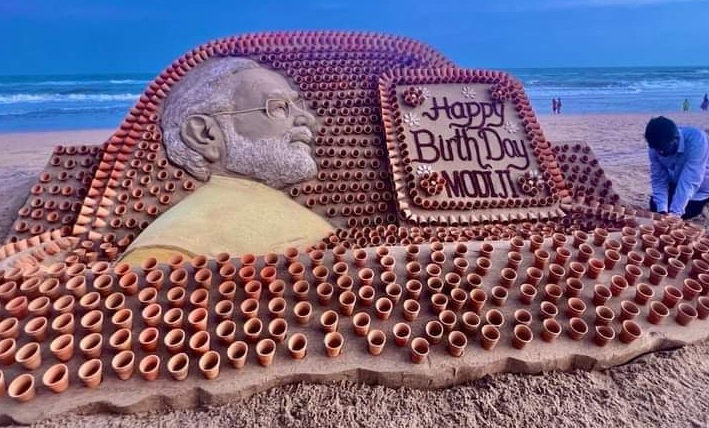 New Delhi: Prime Minister Narendra Modi turns 72 on Saturday, September 17. This is will be his ninth birthday as the prime minister of India. The PM doesn’t like standing at ceremonies and usually likes his birthday to be a working day like any other.

It will be an exhilarating birthday this year as PM Modi will be in Madhya Pradesh on his birthday to release the eight cheetahs being brought from Namibia into the Kuno National Park. The wild cats were declared extinct in the country in the 1950s, while his party, the Bharatiya Janata Party (BJP) announced various programmes under “Seva Pakhwada” (service fortnight) across the country from 17 September to October 2 to mark PM Modi’s birthday.

Thousands of blood donation camps, health check-up camps and other programmes will be organized.

Meanwhile, in Delhi, a restaurant has come up with a unique way to pay tribute to the PM by serving an elaborate thali with 56 items, a nod to the famous “56-inch Modiji” remark. Sumit Kalra, the owner of Delhi-based ARDOR 2.1, said customers will be able to choose between vegetarian and non-vegetarian dishes when ordering the jumbo thali.

The BJP’s Delhi unit organize a special race on Saturday with participants from slums to mark the occasion. Union Home Minister Amit Shah will flag off the race.

Here’s how PM Modi celebrated his birthday ever since he came to power.

He was in Gujarat to take the blessings of his mother in Gandhinagar. He also welcomed Chinese President Xi Jinping in Ahmedabad on his 64th birthday and showed him Sabarmati Ashram and Sabarmati Riverfront.

He visited ‘Shauryanjali’, a six-day military exhibition to mark the golden jubilee of the 1965 Indo-Pak War in New Delhi.

He flew to Gujarat to meet his mother and then went to Navsari where he attended a function where aid was distributed to differently-abled persons.

He met his mother in Gandhinagar and later, dedicated Sardar Sarovar Dam in Kevadia to the nation.

He celebrated his birthday in his parliamentary constituency Varanasi with school children. He gave gifts to the students of the school and later offered prayers at the Kashi Vishwanath Temple in Varanasi, Uttar Pradesh.

PM Modi visited the Statue of Unity and Sardar Sarovar Dam in Gujarat on his 69th birthday.

It was a low-key birthday due to COVID-19. The BJP organised events with a focus on public service across the country to celebrate PM Modi’s birthday as ‘Sewa Divas’.

The PM participated virtually in the 21st Meeting of the Council of Heads of State of the Shanghai Cooperation Organisation (SCO), and through video-message in the Joint SCO-CSTO Outreach Session on Afghanistan.