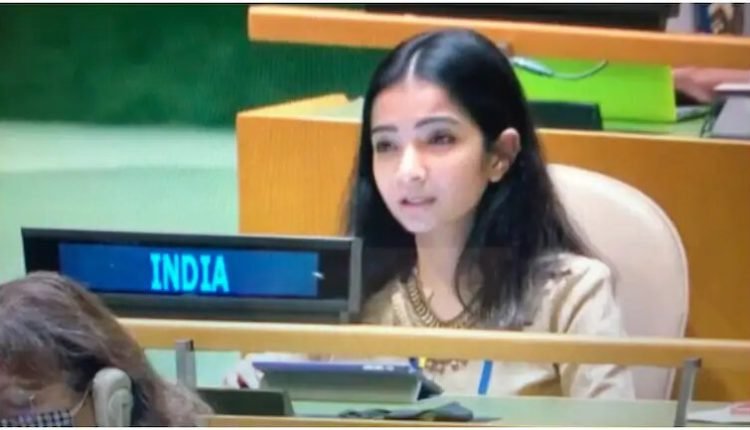 New Delhi: India denouncing Pakistan as a patron of terrorism and a suppressor of minorities in reply to Pakistan Prime Minister Imran Khan’s tirade against the country, is the main headline today (Saturday). However, it is the photograph accompanying the news that has attracted the attention of readers and netizens alike.

The photo is of Sneha Dubey, India’s first secretary to the UN, who said: “This is the country which is an arsonist disguising itself as a fire-fighter. Pakistan nurtures terrorists in their backyard in the hope that they will only harm their neighbours. Our region, and in fact the entire world, has suffered because of their policies. On the other hand, they are trying to cover up sectarian violence in their country as acts of terror.”

Shortly after her speech was posted on social media handles, Indians hailed her for replies, marvelling at the age at which she was given this responsibility and the way she handled it.

Know more about the young officer

Sneha, a 2012 batch IFS officer, completed her schooling in Goa. She then received her higher education in Pune’s Fergusson College and finally did her MPhil from the School of International Studies, Jawaharlal Nehru, University, Delhi.

Ever since she was 12-years-old, she wanted to join the Indian Foreign Services and passed the civil services examination in her very first attempt in the year 2011.

Her inspiration to join the foreign services was a combination of learning about international affairs, the thrill of discovering new cultures, representing the country, being part of important policy decisions and helping people, she told News18.

Sneha, who is fond of travelling, believes that becoming an IFS officer has given her the best opportunity to represent the country. She is the first in her family to join the government services. Her father works in a multinational company while her mother is a school teacher.

After being selected for the foreign service, Sneha Dubey’s first appointment was in the Ministry of External Affairs. Then in August 2014, she was sent to the Indian Embassy in Madrid.

Twitter users were full of praise after Dubey’s video surfaced. One user said, “What a way to shut the mouths of the jokers in Pakistan… every word was so carefully chosen… full of facts… brilliant.”

Some Twitter users were also quick to compare Dubey to India’s prior women officers who have countered Pakistan at the United Nations.

“India’s women diplomats to the UN are brilliant. Eenam Gambhir, Vidisha Maitra and now this fiery right-of-reply by Sneha Dubey!”