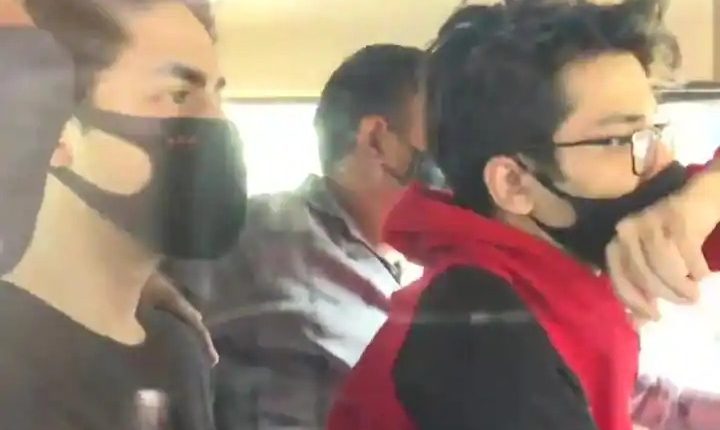 The report further said that the NCB had picked one Shreyas Nair, who had allegedly supplied drugs to Aryan and his friend Arbaaz. His name was found in their mobile chats, which further revealed that the three had earlier met at parties.

Aryan was arrested at 2 pm on Sunday on basis of these chats.

According to News18, Aryan’s phone and WhatsApp chats revealed that he was regularly ordering and consuming drugs for the last 4 years.

While Arbaaz told the NCB that a Goa-based peddler used to supply him with the drugs, the other accused, Munmun, revealed that she received the drugs near the international airport, close to a five-star hotel, the news magazine added.

NCB Zonal director Sameer Wankhede had earlier told ETimes that they are exploring the links of the accused with a drug peddler. “We have apprehended one peddler from the supply chain of this group of youngsters, who had made a booking together for the event. We are investigating his links with the accused. That’s been new detention from our department. We found some drugs in his possession, too,” he added.

Media reports further said that the anti-drug agency seized Mephedrone (Meow Meow) drug during the second-round raids on the cruise, where the rave party was busted on Saturday night.

Earlier, the NBC had recovered banned narcotic substances, including 13 grams of cocaine, five grams of MD, 21 grams of charas and 22 pills of Ecstasy, worth Rs 1.33 lakh from the cruise.

Also Read: When Aryan Khan’s Mother Gauri Was Detained For Possession Of Marijuana

The drugs were reportedly hidden in women’s sanitary pads and medicine boxes. Aryan was carrying drugs in his lens boxes, reports further said.

While pleading for his bail, Lawyer Satish Maneshinde, however, had said that no contraband was found in his possession.