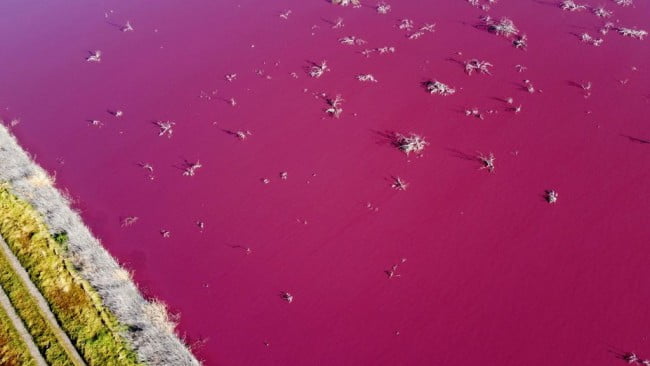 In a rare but worrying phenomenon, a lagoon in Argentina has turned bright pink.

Environmental experts and activists have blamed it on pollution caused by a chemical which has been used to preserve prawns for export.

The eye-catching colour of the Chubut river in Pantagonia region, located in southern Argentina, has attracted many onlookers from far and wide. But residents have been complaining of foul smells and pointing out environmental issues around the river and lagoon.

Activists say it’s sodium sulfite, present in an anti-bacterial product used in fish factories, whose waste contaminates the Chubut river, which feeds the Corfo lagoon and other water sources in the region.

“Those who should be in control are the ones who authorize the poisoning of people,” Lada was quoted as saying by AFP. He added that the lagoon turned pink last week.

There are several plants in the region which process fish for export, mainly prawns. These plants generate thousands of jobs.

“It’s true that fish processing generates work. But these are multi-million-dollar profit companies that don’t want to pay freight to take the waste to a treatment plant that already exists in Puerto Madryn, 35 miles away, or build a plant closer,” said Lada.