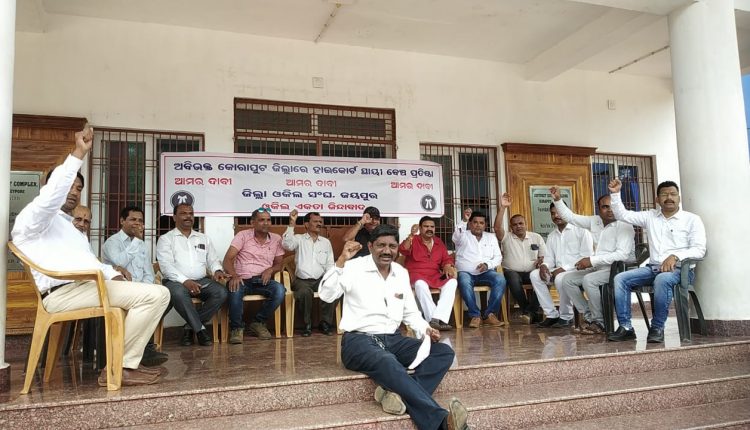 Koraput: The lawyers of Odisha’s Koraput district on Wednesday boycotted the courts to press their demand for setting up a permanent bench of the Orissa High Court.

The District Bar Association, Jeypore has decided that its members will boycott court works on the last 2 days of every month to press their demand. No legal work would be done in the courts across the district on the two days except hearing of the bail application of undertrial cases, said Saroj Das, president of the Bar Association.

As per the decision, the lawyers in around 20 courts in Jeypore boycotted the work and staged demonstration in support of their demand.

Das said they were demanding the bench in undivided Koraput district to prevent poor litigants from running to the High Court at Cuttack in connection with their cases. The litigants from Koraput, Malkangiri, Gajapati, Nabarangpur and Rayagada districts will benefit immensely, if the bench is set up anywhere in southern Odisha, he added.

He further said though they have been demanding the permanent bench since 2008, it has remained elusive till date. The lawyers would continue court boycott till the demand is fulfilled, he added.

It may be noted that Union Law Minister Kiren Rijiju had urged chief minister Naveen Patnaik to obtain the approval of the Orissa High Court for setting up the benches in western and southern Odisha recently.

But the High Court Bar association had opposed it and decided to form an action committee to prepare a resentment representation to submit to the Chief Justice not to give his consent for the two benches.

Test Vs England: Bumrah To Lead As Rohit Is Ruled Out; Who Was Last Pacer To Lead India?