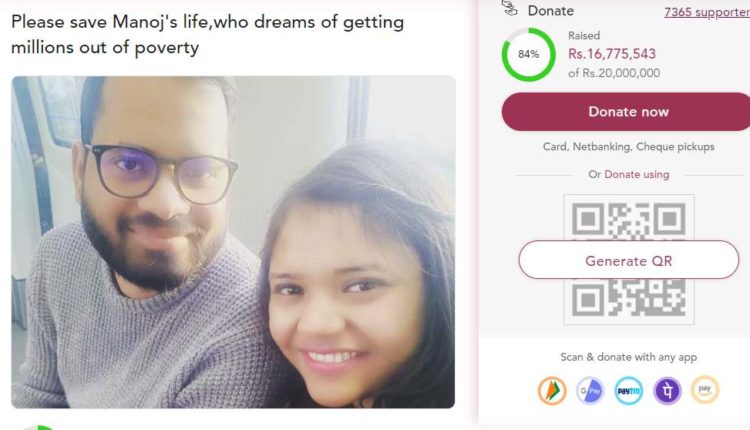 It was a WhatsApp message from another young alumnus of my alma mater XIMB that brought Nikita’s request to my attention. Nikita and her husband Manoj were both recent alumni, and I was not connected directly with them.

Manoj, a young professional working in the development sector is directly involved in the upliftment of vulnerable segments of our population from poverty and like millions of others, he too came under the grips of the COVID-19 virus. However, due to an initial negative RT-PCR report and the consequent delay in treatment, his condition deteriorated and in the first week of June, his doctors advised that for him to survive, a lung transplant and ECMO treatment till such time the transplant was possible, were essential.

The good news – all the required infrastructure and facilities, including ECMO equipped air ambulance, hospitals with ECMO facility, qualified medical personnel and possible donors for the lung transplant were available, or could be made available quickly.

The bad news – the total estimated cost was upwards of Rs.2 crores.

In the pre-Internet era, the possibility of raising such a huge amount, that too within a short span of time, was practically non-existent. Even if the government stepped in to help through their relief funds, the process itself was long and cumbersome, and by the time any funds would have been released, it would have been too late.

Luckily today, we have the benefit of a combination of tools that can be of tremendous help in situations like this.

The first is the Internet that enables us to connect to the rest of the world. The second is the presence of crowdfunding websites and apps that help in creating an appeal for help and provide an easy way for those interested to contribute funds. The third is social media that is invaluable in ensuring that the appeal reaches as many people as possible in the shortest time possible.

So when Nikita created an appeal on one such crowdfunding site and shared it with her friends and relatives, it spread like wildfire. And along with wishes and prayers for Manoj, funds too flowed in.

Like me, most of those who responded had never met or known Manoj or Nikita. The reasons for their generosity varied.

While some identified with them as they were moved by the circumstances, some responded because of common ties – to their alma mater, to their state, to their language or to their profession. Some responded because the request was sent to them by someone they respected, while some contributed because it was in their nature to respond to any such request that came their way. Whatever the reason, the important fact was that they chose to give whatever they could for a noble cause.

Due to the pandemic and the severity of the second wave, Nikita’s was not the only appeal for funds for treatment of Covid. What differentiated it was the speed at which it could reach thousands of people, and subsequently, the speed at which funds were collected. I was particularly impressed by how the appeal spread within the XIMB alumni network and within two days had reached every batch group, city group, special interest groups, and countless posts were shared on WhatsApp, Telegram, Facebook, Instagram as well as on Linkedin and other social media platforms.

Here, I would like to take a moment to dwell on how different platforms treat the same post differently. My post on supporting Manoj on Linkedin was seen and responded to by many more of my contacts than on Facebook, though I have roughly the same number of connections on both platforms, and Linkedin is perceived to be more of a professional platform and Facebook a social one.

Funds are not the only way crowdsourcing has changed the way support is sought or received – through the worst phase of the second wave of Covid-19 in India, it is these groups that sprang up on social media that worked day and night to provide succour to patients and their attendants.

Thanks to the emergence of the Internet, which has in turn given rise to social media, we the common citizens of the world are now able to use the power of networks to support one another at times like this, when public infrastructure fails us. It has enabled us to bring to fore our natural instinct to help one another in times of need, not bothering about caste, creed, religion or any such divisive factor.

It is this innate goodness in all of us that has helped raise funds for people like Manoj and so many others who would otherwise have not had the benefit of accessing the medical care they need.

As far as Nikita’s appeal is concerned, as I write this, in a matter of a little over a week since the appeal was launched, around 80% of the funds have been raised. However, we still need to raise the balance, so if you would like to know more about this fundraiser or would like to contribute (no amount is too small – every rupee matters), please visit https://bit.ly/2TqjqU6 . Thank you!